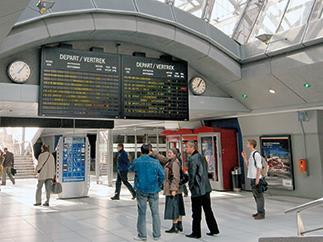 EUROPE: BeNeRail International, the international sales and distribution joint venture set up in 2003 by the Belgian and Dutch national operators, announced on May 14 that it had agreed to become the launch customer for a community IT services platform being developed by software specialist Amadeus.

BeNeRail International manages a raft of legacy IT systems which handle the reservation and inventory functions for international bookings made through its constituent operators and Luxembourg’s CFL. By agreeing to join Amadeus’ newly-developed community model, BeNeRail is effectively outsourcing these IT management functions to a specialist provider. Amadeus will manage the back-office systems from its data centre in Erding, Germany, which already processes reservation and inventory transactions for many of the world’s airlines.

Amadeus says that its rail community, which will form part of its Total Rail family of services, has been developed as a bespoke response to the needs of the industry, including the ability to deal with both ‘walk-on’ and reservation-only policies.

‘In many ways BeNeRail was the ideal launch partner for our concept’, explains Thomas Drexler, Head of Rail at Amadeus. ‘It must handle both “open” bookings, like those on DB or SBB, and “closed” reservations, as typically used by Thalys or Eurostar.’ Amadeus expects the partnership to cover both direct and indirect distribution, meaning that, for example, SNCB station staff and online travel retailers alike would access the same back-office network. Amadeus introduced the similar Altea community model in the airline sector in 2000, when British Airways and Qantas were the launch customers. Today 118 carriers have signed up.

‘This is about using an IT outsourcing model to build a community of operators with the same broad distribution needs’, says Arnold de Brauwer, President of BeNeRail International. He hopes that the agreement will pave the way for significant reductions in fixed IT costs for the partner railways, while ensuring they are able to invest in technology, and enhance and standardise both direct and multi-channel distribution.