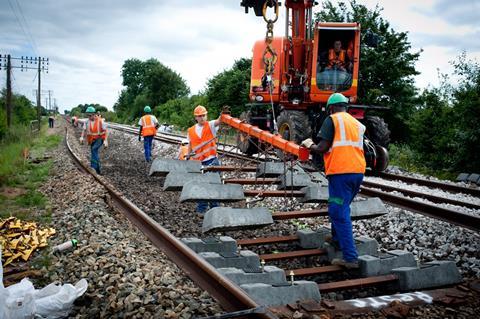 FRANCE: Meeting on December 20, the board of infrastructure manager SNCF Réseau formally approved the first multi-year performance contract with the national government, as required under railway reform legislation enacted in 2014.

Welcoming the government’s long-term commitment to the rail network as a ‘very important step’, SNCF Réseau said the multi-annual plan had lifted its investment and modernisation budget ‘to a level never achieved before’. As well as providing future visibility, the multi-annual funding envelope would release it from the ‘vagaries’ of annual budgets.

The contract is intended to address six major objectives:

The programme envisages total spending of €46bn over the next 10 years. Of this, €27·9bn is to be spent on the core network, including high speed lines and Intercité routes; the annual allocation of €2·6bn in 2017 will rise to €3bn a year from 2020.

A further €12bn is to be spent on regional lines, increasing from €900m in 2017 to €1bn a year from 2018 – a significant increase on the €600m allocated in 2016. Some of this will be channelled through the framework agreements between the national and regional authorities.

The remainder of the package has been ring-fenced for specific projects, with €4·5bn allocated for ‘compliance work’ such as the removal of level crossings and accessibility improvements for persons of reduced mobility. Another €1·8bn is allocated for purchasing new equipment including track maintenance machines, cranes and condition monitoring systems.

In order to achieve the financial ‘return to equilibrium’ required under the reform legislation, new rules for investment in network development are to be introduced. Full cost coverage for network operations is to be achieved within 10 years through improved performance, higher access charge revenues and dividends. A ‘reasoned opinion’ would be sought from the regulator on SNCF Réseau’s contribution to any investment projects whose total value exceeds €200m.

SNCF Réseau anticipates that the multi-annual plan will enable it to deliver performance improvements and achieve efficiency savings of €1·2bn by 2026. It points out that a renovated network should require less spending on corrective maintenance, while procurement savings will come from the ability to establish long-term relationships with its suppliers.

Commercial revenues are expected to develop ‘in relation to the improvement of the quality of service’, with the ‘evolution’ of infrastructure charges paid by passenger operators on the basis of a gradual increase in ridership. Some profits from SNCF Mobilities will effectively be transferred to SNCF Réseau, which will also benefit from property and real estate revenues. Nevertheless, the infrastructure manager’s debt is expected to increase from €44bn to around €60bn over the 10 years.

The multi-annual agreement is subject to formal approval by independent regulatory authority ARAFER, which reviewed SNCF Réseau’s draft budget on December 15 and called for ‘an ambitious contract’ to be concluded as soon as possible.