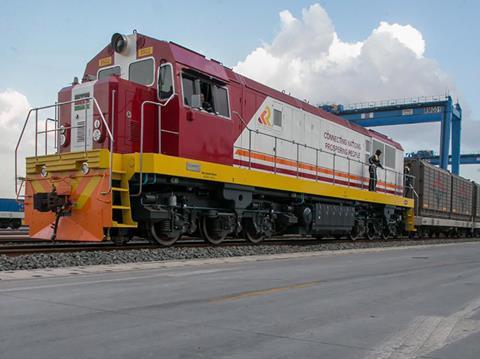 KENYA: Little more than a year after the opening of the Chinese-built 1 435 mm gauge railway between Mombasa and Nairobi, there are signs that East Africa’s love affair with China’s Belt & Road Initiative may be waning.

On May 8, Kenya’s Transport & Infrastructure Minister James Macharia and his Ugandan counterpart Monica Ntege announced that further phases of the ambitious standard gauge railway serving the two countries had been put on hold in favour of upgrades to the existing metre gauge network.

Last November, Kenya Railways Corp’s Acting Managing Director Phillip Mainga reported that the first phase of the SGR – which is being operated under contract by China Road & Bridge Corp – had become ‘a significant component of the country’s overall infrastructure’. In the first year of operation, he reported, the four daily Madaraka Express services had carried 1·9 million passengers and trains were being lengthened from 11 to 20 coaches to cope with demand. Container traffic had passed 2 million tonnes, and the addition of bulk traffic would require an increase from eight to 12 freight trains per day.

Construction is nearing completion on Phase 2A, which will extend the route by 120 km from the capital to Naivasha in the Rift Valley; this is reportedly on course to open in August. But while Mainga was confident that work would soon get underway on the next stage of the project, from Naivasha to the Lake Victoria port of Kisumu, it seems that concerns are growing over the cost of funding a completely new railway to duplicate the existing network.

Kenya has already agreed loans from China’s Export-Import Bank totalling US$3·2bn to fund the Mombasa – Nairobi line and almost US$1·5bn for the Naivasha extension. It was expected to negotiate a further US$3·7bn package to take the SGR from Naivasha to Kisumu and the Ugandan border at Malaba, but although local media reported that a deal was imminent, nothing was agreed at the recent Belt & Rail Forum in China.

Macharia now believes that connectivity between Naivasha and the Ugandan border could be achieved more rapidly by rehabilitating the existing railway than by waiting three or four years for the completion of a new line. ‘Eventually we will do the SGR but for the time being it is good to have something which is working’, he said.

The plan is to spend around US$150m fettling up the former East African Railways main line from Naivasha to the border and a further US$60m on a 43 km connection to the isolated SGR terminus. The minister reported that an unspecified private sector partner had agreed to do the work under a PPP arrangement, and recoup its investments by operating the line.

Uganda has been in negotiation with the Chinese for construction of its own line from Kampala to the border, for which land acquisition and clearance is already underway. However, with the Kenyans halting work Ntege said it would also defer the project for the time being. ‘We have to wait until Kenya has got somewhere, so that as we do the SGR on the Ugandan side we arrive in Malaba at the same time’, she explained.

As a stopgap, she said Uganda would spend around US$170m rehabilitating its metre gauge line from Kampala to Malaba. She noted that upgrading of the existing network was already in progress, with the EU contributing US$32m towards repair of the northern line from Tororo to Gulu.