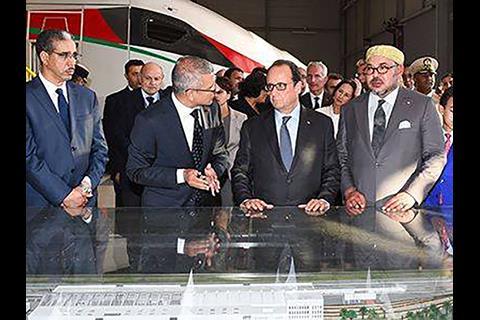 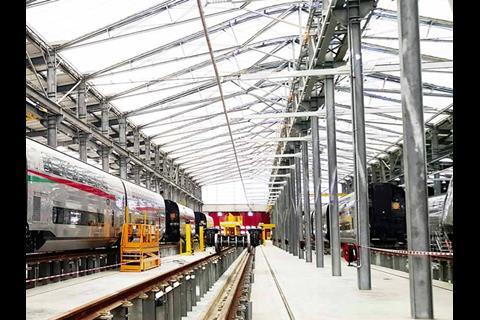 MOROCCO: The rolling stock depot in Tanger which will maintain and service the country’s fleet of high speed trains was officially inaugurated by King Mohammed VI and French President François Hollande on September 20, at a ceremony attended by ONCF Director-General Mohamed Rabie Khlie and SNCF President Guillaume Pepy.

Two of the 14 Alstom-built double-deck trainsets have already been delivered to the port of Tanger-Med and are now undergoing static commissioning before the start of test running. The two railways have also formally established the joint venture company which will run the depot under a 15-year contract valued at €175m. Launched on September 15, Société Marocaine de Maintenance des Rames à Grande Vitesse is owned 60% by ONCF and 40% by the French national operator.

According to SNCF, the new depot and maintenance regime will be derived from that used in France. Under an intergovernment protocol signed in October 2007, the two railways have been co-operating in a ‘partnership of equals’ to support the development of the Moroccan high speed line. A technical co-operation team of around 30 people has been working on the project since 2009. SNCF staff will also support the early phase of operations, ‘building on more than 30 years of experience’ since the start of high speed services in France.

The two partners have jointly established a railway engineering and operations training centre in Rabat. Although its new buildings are not expected to be ready until next year, the Institute de Formation Ferroviaire began work at the end of March 2015. With 30 lecturers drawn from both railways, it has already provided more than 5 000 days of training to around 1 700 students. By the end of this year, more than 2 200 ONCF and 1 100 SNCF trainees are expected to have passed through the facilities. As well as training employees of the parent railways, IFF will also make its courses available to other railways in Africa and the MENA region.