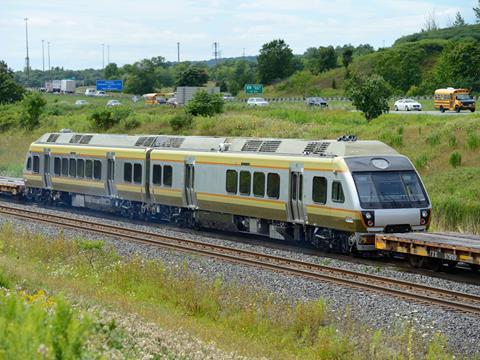 The US$75m order placed in 2011 covers 12 Type A driving cars and six Type B intermediate cars with toilets, which will enable the operation of a mix of two-car and three-car units. Similar to 18 DMU cars ordered by Sonoma-Marin Area Rail Transit Authority in the USA, they will offer level boarding, wheelchair places and extensive luggage space. They are being are being built at Nagoya in Japan, with final fitting out taking place at Nippon Sharyo’s plant in Rochelle, Illinois.

The DMUs will comply with EPA Tier 4 emissions standards, and are designed for easy conversion into EMUs if the proposed electrification of the airport line goes ahead.

UP Express is scheduled to launch next year, using 22 km of upgraded route from Union station and a new 3 km elevated spur into the airport. Services will run every 15 min, with a 25 min journey time.