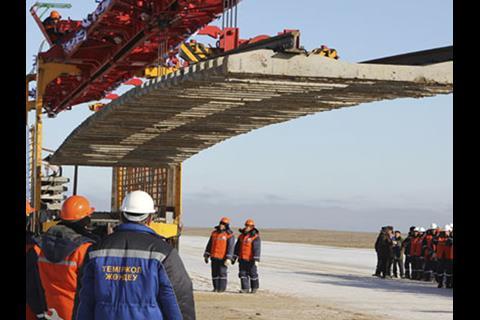 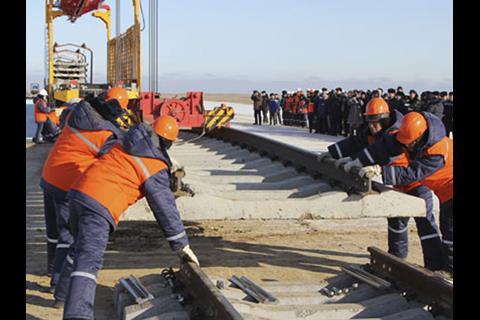 KAZAKHSTAN: Two new lines are on course to open later this year, after ceremonies in December marked the joining of the tracks being laid from each end of the routes.

According to national railway KTZ the lines are of an economic and social importance with it would be 'difficult to over-estimate'.

A ceremony at Tassay marked the meeting of tracks on the 493 km Shalkar - Beyneu western section of the 988 km trans-Kazakhstan route which is under construction through sparsely-populated steppe, desert, sand and salt marsh between Zhezkazgan and Beyneu.

Completion will cut around 1000 km from the east-west route between the Dostyk border crossing with China and the Caspian Sea port of Aktau.

More than 30 companies are working on the biggest railway project since Kazakh independence, led by Kamkor subsidiary Temirzhol Zhondeu with 1 000 staff. Equipment has been supplied by Geismar and Plasser & Theurer.

A second ceremony marked the joining of the tracks for the 214 km north-south route which is under construction between Arkalyk and Shubarkol.