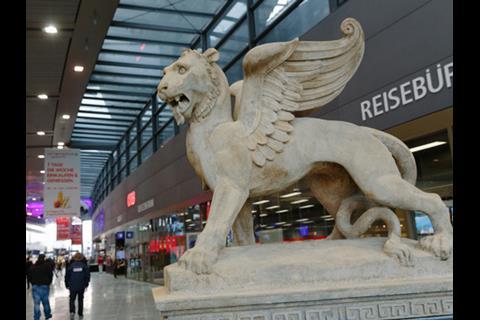 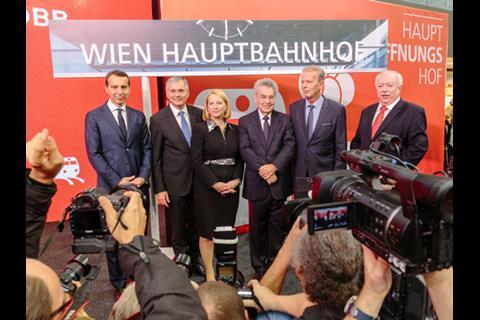 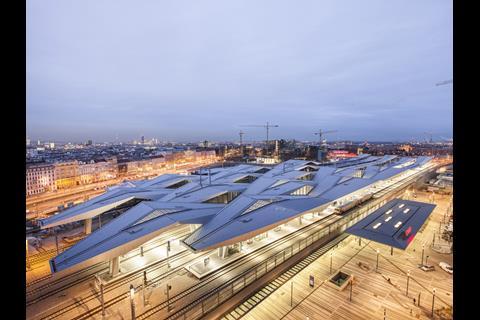 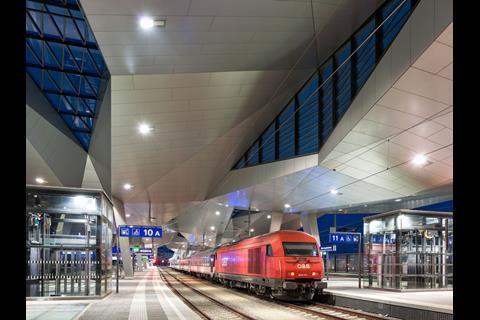 AUSTRIA: Wien Hauptbahnhof was formally inaugurated by President Heinz Fischer when he launched two days of celebrations at the capital's new main station at 10.00 on October 10.

The through station integrates north–south and east–west routes including three TEN corridors by replacing the former Südbahnhof and Ostbahnhof termini which were situated at right angles to each other. It is expected to handle 145 000 passengers and 1 000 trains a day once fully operational.

Regional and local trains began serving Hauptbahnhof in December 2012. Many long distance services are scheduled to begin using the new station from the timetable change on December 14 2014, and a 2 km link between the Ostbahn and route S7 will open to enable long-distance trains to reach the airport. Some long-distance services will continue to use Wien Westbahnhof until they are transferred to Hauptbahnhof in December 2015.

Hauptbahnhof is linked to the city centre by U-Bahn, and ÖBB says the capital’s other principal stations can be reached within 30 min. There are five island platforms with 10 faces, covered by a glass and steel roof. There are 800 seats where passengers can wait without making purchases from the 90 retail outlets which cover 20 000 m2, and free wi-fi in designated areas. The travel centre includes a ‘Kids Corner’ to entertain young passengers. There are 29 escalators as well as 14 lifts to provide full step-free access, an underground car park and 1 110 cycle spaces. A Lion of St Mark sculpture from the former Südbahnhof which symbolises the route to Venezia has been restored.

The €987m cost of building the new station has been funded by ÖBB, the city, EU sources and property developments. Initial works were launched in June 2007, and the main construction contract worth €220m was awarded to a consortium led by Strabag in 2009. Much of the former railway land around the new station has become a major urban development including office, retail and educational facilities.

‘With Wien Hauptbahnhof we are setting new standards for the 21st century’, said ÖBB Holding Chief Executive Christian Kern at the opening.