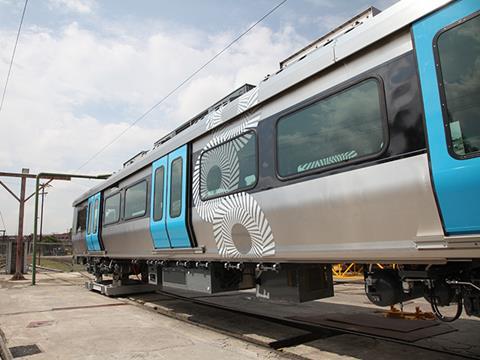 SOUTH AFRICA: The first two completed cars for the 600 X’Trapolis Mega commuter electric multiple-units ordered by Passenger Rail Agency of South Africa have been rolled out at Alstom’s Lapa factory in Brazil. Planned to be a mix of six-car and four-car formations totalling 3 600 vehicles, the trainsets are being produced by the Gibela joint venture of Alstom (61%), New Africa Rail (9%) and Ubumbano Rail (30%).

The first 20 EMUs are being built at Lapa, where South African teams are being trained ahead of the opening of a purpose-built plant in Dunnottar, 50 km east of Johannesburg. With six bodyshells now completed, two cars are undergoing static testing and the remaining four are being fitted out. The first complete unit is scheduled to be shipped to South Africa in November, and will then undergo an intensive testing programme before entering revenue service by June 2016.

Alstom’s Sesto plant in Italy is to supply the traction motors for the 120 km/h EMUs, with French input to include the 1 067 mm gauge bogies from Le Creusot, cabs from Reichshoffen and other components from Ornans, Tarbes, Villeurbanne and Saint-Ouen.