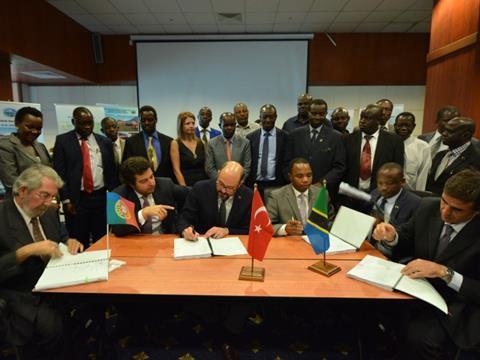 TANZANIA: The government signed contracts with Turkish firm Yapı Merkezi and Portugal’s Mota-Engil on February 3 for the construction of a new 1 435 mm gauge railway between Dar es Salaam and Morogoro.

To be built under a turnkey contract, the 207 km single-track line is being designed for operation at up to 160 km/h. Tenders for the project were called in September by the state-owned railway infrastructure authority Reli Assets Holding Co, with bids to be submitted by early December. Announcing the signing of the contract, Reli said construction of the line would start in March and take 30 months to complete.

The contract signing follows a visit to Tanzania in January by Turkish President Recep Tayyip Erdogan, during which the Turkish government was reportedly asked to provide financial backing for the project.

The new line to Morogoro is intended to form the first stage of a planned 2 200 km standard gauge network linking Dar es Salaam with Kigali in Rwanda, Musongati in Burundi and the Lake Victoria port at Mwanza. This would supersede the existing metre-gauge Central Railway network operated under concession by Tanzania Railways Ltd, with priority going to the 971 km between Dar es Salaam and Isaka..

According to Bloomberg, Yapı Merkezi and Mota-Engil have also been selected to build around 400 km of new line from Isaka to the borders of Burundi and Rwanda at a cost of around US$1bn.

China’s Eximbank agreed last year to provide up to US$7·6bn to support Tanzania’s US$9bn railway construction programme, which was to be undertaken by Chinese firms under accords signed in 2015. However, these agreements were subsequently cancelled by incoming President John Magufuli who took office in November 20