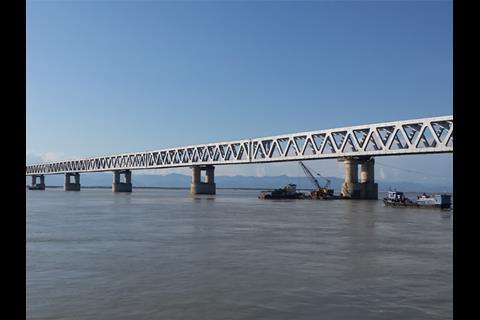 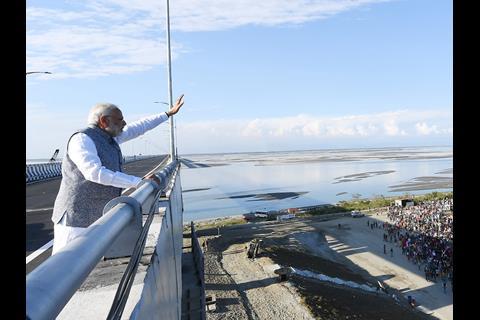 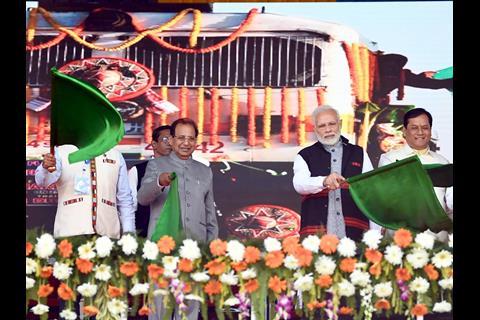 The 4·94 km Bogibeel Bridge crosses the River Brahmaputra between the Dibrugarh and Dhemaji districts of the northeastern state of Assam. It has a double-track 1 676 mm gauge railway on the lower deck, with a three-lane road on the upper deck.

The foundation stone was laid when the bridge was approved by the national government in 1997, but the project got only underway in 2002, with an expected six-year timescale. However construction did not begin until 2007 and suffered from delays and cost overruns, with the cost rising from intial estimates of Rs18bn to Rs59bn.

Design studies were undertaken by Rites. Gammon India built the concrete piers, Essar Steel supplied steel and a consortium of Hindustan Construction Co, DSD Brückenbau and VNR Infrastructures were responsible for the welded steel superstructure which comprises 39 spans of 125 m and two spans of 33 m.

The bridge is ‘an engineering masterpiece which has many technical firsts to its name’, commented Arjun Dhawan, HCC Director & Group CEO. ‘It is India’s first fully welded warren truss girder type steel bridge. Not only has an incremental launching technique for superstructure erection been used for the first time in India, it is also the world’s longest incrementally launched steel bridge. HCC is proud to create such marvels for the nation.’

HCC said the wide river was ‘ferocious and unpredictable’, with strong currents, widespread erosion of the banks and short working periods. Humidity is addressed using a ‘complex’ material protection system, and the superstructure includes copper-bearing steel plates to reduce corrosion. The bridge is designed to withstand earthquakes with magnitudes in excess of 7·0.

The first freight train had crossed the bridge on December 2.