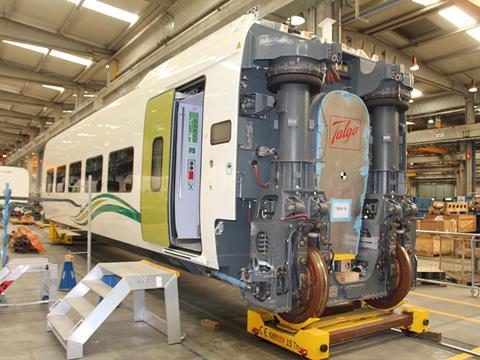 EGYPT: Egyptian National Railways has selected Talgo to supply and maintain a fleet of six 160 km/h trainsets at a total cost of around €158m, the manufacturer announced on April 7.

Intended to operate inter-city services on ENR’s principal routes linking Alexandria, Cairo and Aswan, the trains will be formed of 14 passenger vehicles, together with a diesel-electric locomotive and a generator car.

According to Talgo, the interior configuration of the trains will be derived from the 36 trainsets currently being supplied for the Haramain High Speed Railway in Saudi Arabia. These climate-controlled trains have been designed to operate in very high temperatures and are pressure sealed to minimise the ingress of sand.

Each 14-car set is expected to carry 492 passengers, offering a mix of first and second class, as well as a cafeteria car and spaces for passengers with reduced mobility. All vehicles will have onboard wi-fi, and a passenger entertainment system with LED screens at each seat will be provided in first class.

The procurement contract is valued at €126m, with a separate contract covering eight years of maintenance priced at €32m.

The project is being funded by the European Bank for Reconstruction & Development under a tender launched in August 2016. Final bids were submitted in October 2018, and the formal contracts are expected to be signed shortly, leading to delivery in 2021-22. Talgo President Carlos de Palacio Oriol told Railway Gazette that the company had specified a minimum of two years for manufacturing and testing to ensure reliable operation, despite suggestions from the customer that the delivery schedule might be accelerated.