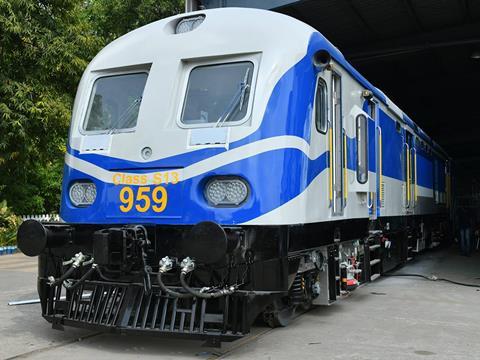 SRI LANKA: The first of six 13-car diesel-electric multiple-units which Indian Railways’ Integral Coach factory is building for Sri Lanka Railways was unveiled at the manufacturer’s plant in Chennai on November 12 .

The order was placed with ICF and RITES under an India-Sri Lanka economic co-operation agreement. It covers a total of 78 coaches of five types intended for short and medium distance travel on non-electrified routes.

The 20 m long car bodies and interior fittings are made from stainless steel to provide corrosion resistance for operation on coastal routes. The bogies and underframes are painted to inhibit corrosion, and inter-vehicle electrical connections meet IP67 standards to prevent water ingress during heavy rain. The outer ends of the driving vehicles have aerodynamic steel front ends, AAR autocouplers and side buffers.

The traction motors and gear boxes were designed and made by Traktionssysteme Austria, and the braking systems by Knorr-Bremse. Remote monitoring equipment is fitted.

The cabs and guard’s compartment are air-conditioned, while passengers areas have oscillating fans. The driving motor cars have toilets for the crew, and the trailer coaches have passenger toilets. The driving trailer cars have accessible toilets, and there are three wheelchair spaces.