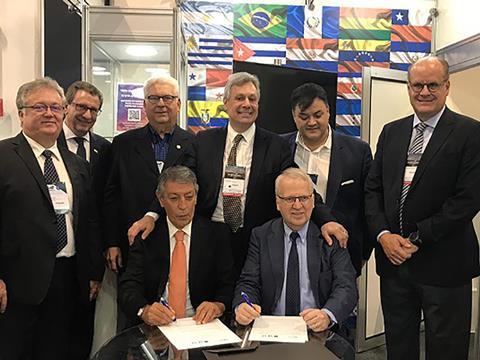 SOUTH AMERICA: The International Union of Railways and the Latin American Railway Association signed a memorandum of understanding in São Paulo on March 19 covering co-operation in staff training and education, railway engineering, passenger and freight transport, tourist trains and the exchange of data.

‘Railways in Latin America should be an enabler to develop sustainable transport on the scale of the continent’, said UIC Deputy Director General François Davenne, adding that standardisation was needed to ensure the interoperability of projects which are currently under development.

UIC said it could work with ALAF to assist in building awareness of the advantages of rail, promote interoperability and improve co-operation between railway operators and between railways and industry.

It said the ultimate objective of its UIC Latin America Regional Assembly was the ‘creation of a professional environment that maximises the potential in available competencies, guaranteeing value for money for our members.’