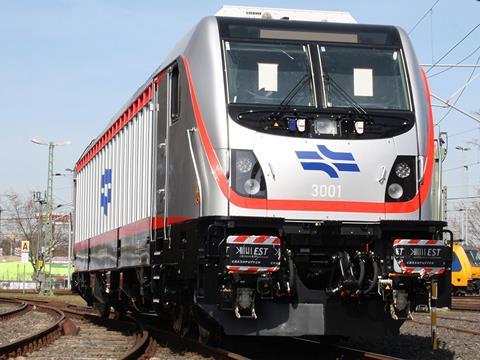 ISRAEL: The first of 62 Traxx AC electric locomotives being built for Israel Railways has been completed and is now undergoing testing at Bombardier Transportation’s factory at Kassel in Germany.

ISR called tenders in July 2014 for the supply of between 62 and 78 locomotives as part of its 25 kV 50 Hz electrification programme. Expressions of interest were received from Alstom, Bombardier, CAF, CNR, CSR, Hyundai Rotem, Siemens and Škoda Transportation. Four bids were submitted, and Bombardier and Alstom were selected for final negotiations. In August 2015 Bombardier was selected to supply 62 Traxx locomotives for 1bn shekels, with an option for 32 more.

The specification required the locos to be able to operate in push-pull mode with up to eight double-deck or 12 single-deck coaches carrying up to 1 400 passengers at a maximum speed of 160 km/h.