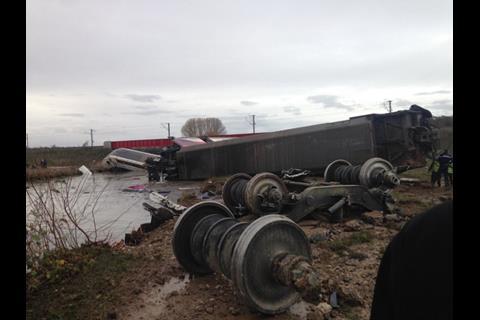 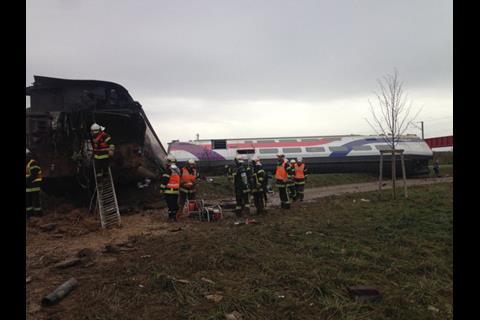 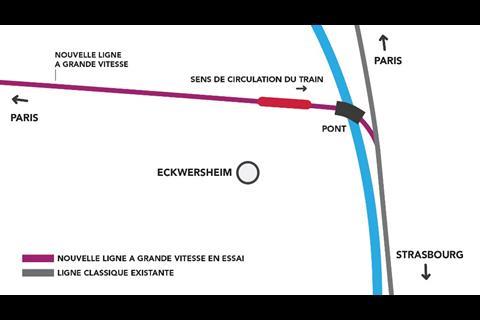 FRANCE: SNCF President Guillaume Pepy emphasised the ‘over-riding importance of organisational and human factors’ following the publication on November 19 of an initial report into the fatal derailment near Strasbourg on November 14 of a TGV during commissioning trials for Phase 2 of LGV Est-Européenne. The accident claimed the lives of 11 people, injuring 37 of which three are still reported to be seriously ill.

The report has concluded that the ‘certain cause’ of the accident was ‘a late braking sequence’. The train derailed at 243 km/h after entering a 945 m radius curve over a canal at Eckwersheim at 265 km/h, instead of the 176 km/h limit applying to that point in the test run. The resulting centrifugal force destabilised the TGV causing the vehicles to derail, with some coming to rest in the canal. The curve forms the approach to the grade-separated junction between LGV Est and the Paris – Strasbourg main line at Vendenheim.

Noting that ‘the immediate cause is now known’, SNCF said that it had found no fault in the condition or operation of the infrastructure or the test train itself which could have contributed to the derailment. Nor were there any irregularities in the operational control of the area.

The report said that there were seven people in the cab of the TGV at the time of the accident. The authors suggest that this may have impaired the driver’s sight lines, and hindered the ability of a second driver to intervene to slow the train. Noise in the cab is also an area of focus, the report added. The two drivers and the traction inspector have been suspended by SNCF pending possible criminal charges.

Speaking at a press conference on November 19, Pepy outlined a series of measures to be implemented immediately. These cover four main areas: the management of test runs, organisational and human factors, disciplinary procedures against the individuals involved, and wider safety improvements.

Specific steps include the suspension of high speed test runs pending completion of an inquiry into how these are managed, and much stricter controls on access to test trains. Pepy said that the ongoing investigation would examine the ‘irresponsible’ presence of children on the train, as well as the interaction between people in the cab and those in the trailer cars.

He reiterated that the accident took place in the ‘specific circumstances of a test prior to commissioning of a railway’, where ‘some of the automated safety systems on the train were deactivated so as to complete the necessary tests of railway systems’.

The report’s findings have been passed to the public prosecutor and to the Director of BEA-TT, responsible for examining railway accidents.