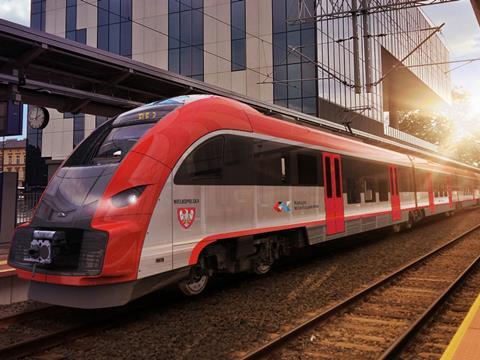 POLAND: Wielkopolskie voivodship signed a contract with Pesa for the supply of five five-car Elf2 electric multiple-units on February 14.

Pesa beat bids from Newag and Stadler, and will work with its subsidiary ZNTK Mińsk Mazowiecki to supply the EMUs between June and December 2020. The EU is providing 48·8m złoty towards the 127·5m złoty contract, which includes options for two more sets.

The 160 km/h trains will be fitted with ETCS onboard equipment, as well as two toilets, air-conditioning, wi-fi, a passenger information system and five ticket vending machines. There would be 240 seats, in addition to multifunction spaces.

Pesa had previously supplied 15 DMUs and 22 first-generation Elf EMUs to Koleje Wielkopolskie, and is currently in the process of delivering 10 Elf2 EMUs. The five trains from the latest order would operate on Poznańska Kolej Metropolitalna services on the PKM 2 route. PKM services along this route would terminate at Kostrzyn in the second half of 2019; they currently terminate at Swarzędz, with services further east operated by KW.