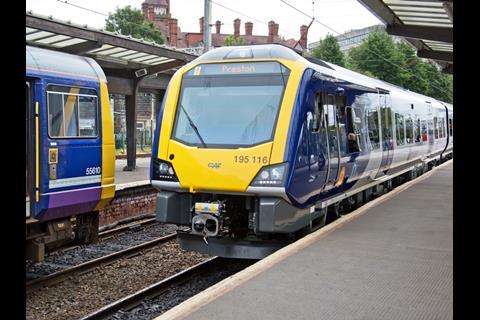 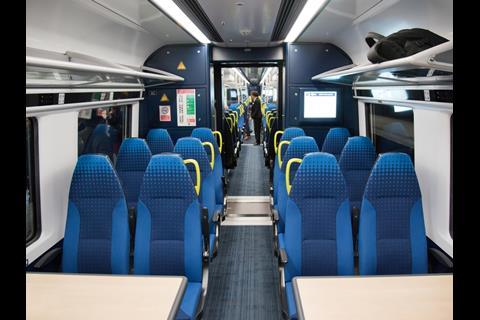 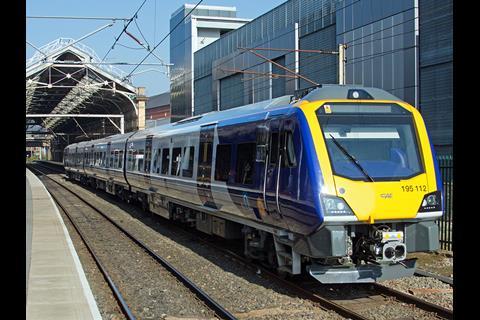 UK: The first nine of 101 diesel and electric multiple-units being supplied to Northern by CAF entered passenger service on July 1.

‘Over the course of the rest of this year, the new trains will be introduced into towns and cities right across the north, marking a genuine transformation of local rail services’, said Richard Allan, Deputy Managing Director of Arriva Rail North. ‘We expect a big increase in customer satisfaction, and what we really hope is that the new trains will attract new customers to rail.’

CAF is supplying 25 two-car and 33 three-car Class 195 DMUs, together with 31 three-car and 12 four-car EMUs of Class 331. The operator has initially deployed seven DMUs on services between Manchester Airport and Liverpool, Windermere and Barrow-in-Furness, and two EMUs between Leeds and Doncaster.

The air-conditioned units have free wi-fi, at-seat power sockets and real-time passenger information displays, as well as spaces for wheelchairs and bicycles. They are intended to enable the withdrawal by the end of this year of ageing Class 142 and 144 Pacer DMUs that are not compliant with PRM TSI accessibility requirements.

The CAF units have been funded by Eversholt Rail, and the leasing company’s Client Relations Director Steve Timothy said their entry into service marked ‘the culmination of a lot of hard work over three years’ by the three companies and regional stakeholders.

Admitting that ‘Northern has faced unprecedented challenges during the past two years, particularly the unacceptable disruption following the May 2018 timetable change’, Arriva Rail North told Railway Gazette that the franchisee ‘remains committed to delivering the transformational plan for customers, and we are working hard to improve performance and reliability for our customers. We are investing heavily in new and refurbished trains, have introduced more than 2 000 extra services each week and hundreds more people have been employed to help customers. These improvements are delivering significant benefits but are still a work in progress.’

Read more about Northern’s new CAF trainsets in the July 2018 issue of Railway Gazette International magazine, available to subscribers in our digital archive.