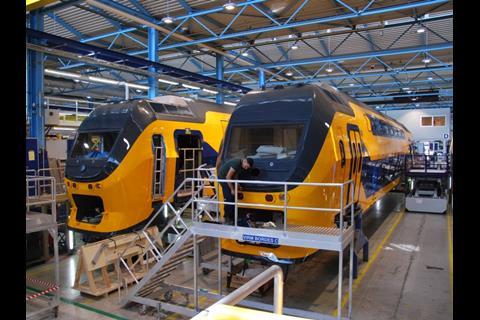 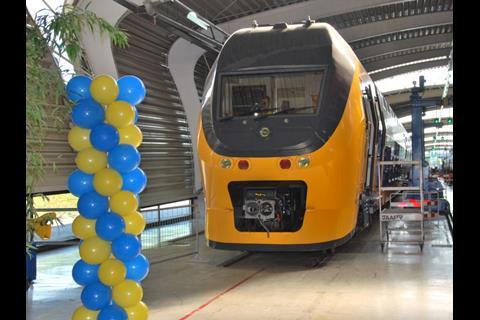 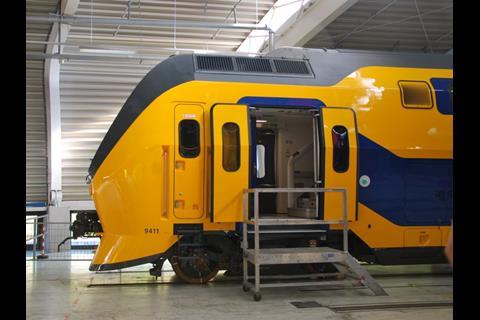 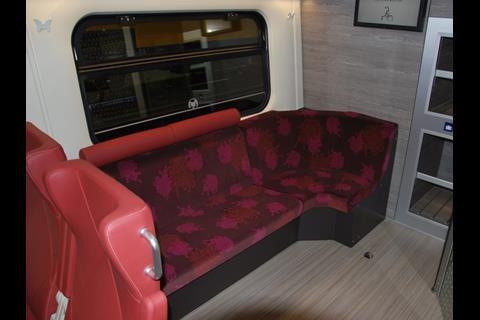 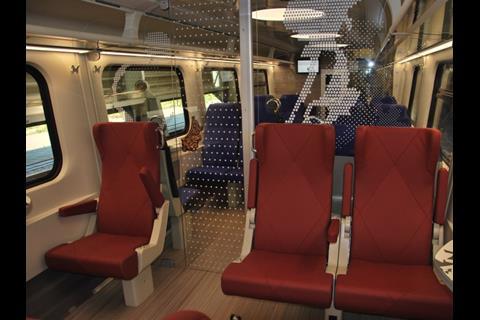 NETHERLANDS: The first of 81 double-deck electric multiple-units to be refurbished at NedTrain’s Haarlem workshops was unveiled on August 30, ahead of its return to passenger service later this year.

The InterRegioMat EMUs were built by Talbot in 1994-96 as 34 three-car and 47 four-car units, and subsequently lengthened to four- and six-car sets designated VIRM.

Work on a pre-production refurbishment began in September 2014. Test running started in July this year. Series refurbishment of the fleet is expected to run until 2020, with one unit completed approximately every two weeks.

The revised interior is designed to provide a modern and open look, and has significant differences between the upper and lower levels. There are new seats throughout the unit. First class has 2+1 red leather upholstered reclining seats, while second class has 2+2 fixed seats with blue fabric. The first and second class seats on the upper deck are laid out in an airline configuration, while the lower deck has a face-to-face layout and ‘lounge’ areas with longitudinal seating.

First and second class saloons are separated by glass partitions and glass doors. There are LCD passenger information screens, wi-fi throughout the EMU and 220 V power sockets in first class. There are new luggage racks, and the space which was originally used for the now obsolete catering trolley lift has been used to provide more luggage space. Wheelchair accessible toilets with bioreactors have been fitted, and every toilet also contains a urinal.

The installation of low-energy HVAC and LED lighting is expected to increase efficiency by 20% compared to the previous onboard systems.

The refurbishment includes aerodynamic improvements. The inter-city livery of yellow with horizontal blue stripes has been retained, but with the position of the stripes now pointing down rather than up. The yellow doors have no stripes and a blue framing to provide higher visibility for visually impaired passengers.

The original traction equipment, bogies and wheelsets have been retained.