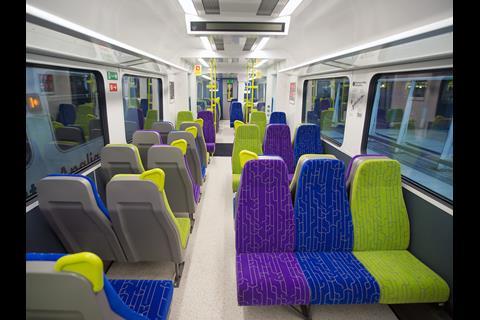 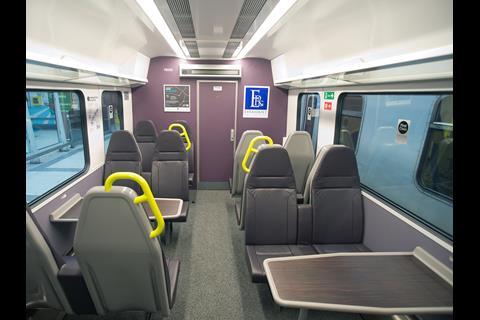 UK: Passengers on the Greater Anglia franchise are being asked to provide feedback on two new train interiors that have been installed in a four-car Class 321 EMU.

Following refurbishment by Wabtec Rail Ltd at Doncaster, the trainset returned to traffic on December 18 and is to be operated in revenue service for a period of 12 months.

Leasing company Eversholt Rail Group has spent £6m on the demonstrator, which has two cars fitted with a 'suburban' interior. This has refurbished 3+2 seating in standard class, a 2+2 first class area with leather seats and power sockets and a new accessible toilet.

The two 'metro' cars have new seats supplied by ATD Coventry, featuring pressed aluminium frames and silicone cushioning. They have been installed in a 2+2 configuration, and more space has been provided in the door vestibules by setting back the draught screens.

LED lighting offering improved energy efficiency has been installed throughout, together with roof-mounted air-conditioning developed by Elite Automotive Systems, providing 72 kW of cooling capacity. Opening hopper windows have been replaced with modern double glazing, and a static converter has been installed under each end car.

Eversholt Rail Chief Executive Mary Kenny said that the completed unit was 'a fantastic demonstration of the possibilities offered by quality refurbishment at an attractive cost. We hope as many people as possible travel on the demonstrator and give us feedback on the new features and the overall experience'.

At a cost of £5·5m, Eversholt has also developed a new traction package which is to be fitted to the demonstrator once it has completed trials with Greater Anglia. Supplied by prime contractor Vossloh Kiepe, this features three-phase traction motors from Traktionssysteme Austria GmbH, 400 kg lighter than the Class 321's DC motors, a single water-cooled inverter per AC motor and an ABB transformer.

The repowered train will be equipped for regenerative braking, but performance will initially be matched to that of the Class 321 fleet which Greater Anglia operates in eight and 12-car formations on its routes from London to Southend, Colchester, Clacton and Ipswich.