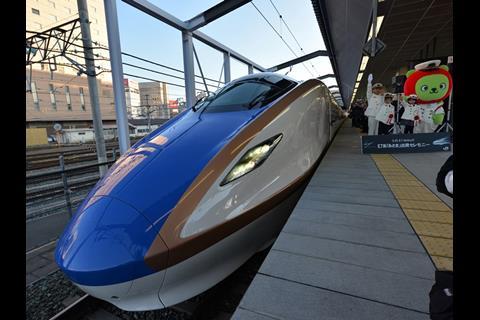 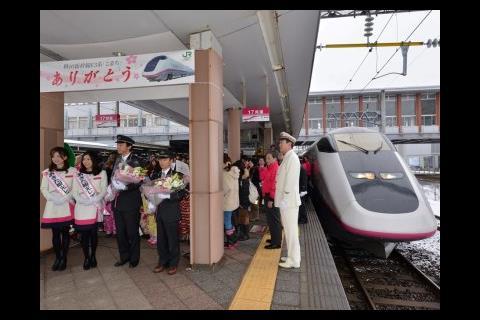 Developed jointly with JR West, which has ordered its own build designated Series W7, the new trainsets are intended to operate Hokuriku Shinkansen services to Kanazawa following the opening of the extension beyond Nagano in March 2015.

As a first step, JR East is deploying the first units on Asama trains between Tokyo and Nagano, operating seven services each way a day. As further sets are delivered, the railway is expected to introduce them on additional services in place of the Series E2 units which have worked the Nagano line since its inauguration in 1997.

The timetable change also marked the withdrawal of JR East’s last remaining Series E3 mini-shinkansen trains from Akita Shinkansen services. A ceremony was held at Akita on March 14 to mark the withdrawal of the small-profile trains, which have been replaced by Series E6 units able to run at up to 320 km/h.

The Series E6 trains operate over the Tohoku Shinkansen between Tokyo and Morioka in multiple with the Series E5 sets, which already run at the higher speed on services to Hachinohe and Shin-Aomori. Replacement of the E3 trainsets by Series E6 has enabled JR East to accelerate its Akita services with the new timetable.