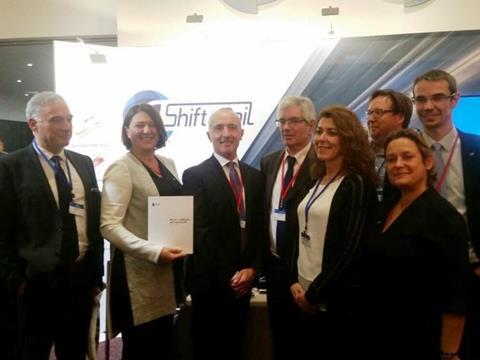 EUROPE: The latest Multi-Annual Action Plan for the Shift2Rail research programme was formally presented to EU Transport Commissioner Violeta Bulc in Tallinn on November 9, as part of the Commission’s Digital Transport Days event.

Recently adopted by the joint undertaking’s management board, the ‘Part A’ Executive View of the MAAP highlights the wide range of Innovation Capabilities which are being developed under the Shift2Rail programme. It is intended to translate the original vision of the Shift2Rail promoters into a series of ‘detailed, results-oriented research and innovation activities’, which are being undertaken by the JU members and other partners, including SMEs, research centres and universities.

According to JU Executive Director Carlo Borghini, it was ‘especially symbolic’ that the plan could be presented during the Digital Transport Days, given that digitalisation and automation lie at the core of many of the Shift2Rail objectives. Confirming her support for the programme, Bulc emphasised the importance of moving from research to deployment. Shift2Rail expects to have the first technology demonstrators available for exhibition at the next InnoTrans fair in September 2018.

Meanwhile, Shift2Rail has opened registration for its next Information Day in Brussels on December 12 where it will outline opportunities in its 2018 Open Call for Proposals. As well as providing an overview of the programme, the day will focus in particular on upcoming funding opportunities under the umbrella of the Horizon 2020 Programme. It is aimed primarily at companies and research organisations which meet the eligibility criteria and wish to carry out collaborative research and projects alongside the activities of the members. During the day, there will also be a matchmaking event organised by the Enterprise Europe Network Berlin-Brandenburg and the European Railway Clusters Initiative.