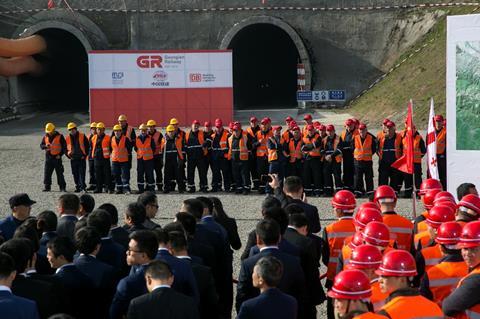 GEORGIA: Staff from national railway GR, contractors and policymakers gathered on November 21 to celebrate the completion of the longest tunnel on the Georgian rail network.

Formed of two single bores, the 8·5 km Kvishkheti – Zvare tunnel forms a central element of the modernisation of the main line between Tbilisi and Makhindzhauri, which is a strategic link between the east and west of the country. The construction consortium was led by CRCC’s China Railway Bureau No 23, DB International and ILF.

The Tbilisi – Makhindzhauri route upgrading began in 2011 and is due for completion by the end of 2019. The scope of work includes the boring of six new tunnels. Once completed, the journey time for passenger trains between Tbilisi and Batumi is expected to be reduced by 1 h.

Speaking at the tunnel completion ceremony, Prime Minister Giorgy Kvirikashvili said that the upgraded railway would help to improve the overall quality of infrastructure in the country, as well as delivering safer and faster journeys ‘compliant with all modern standards’.

He also suggested that the railway works would lead to growth in intermodal traffic via the deep-water port of Anakliya, which is also being expanded. China’s ambassador to Georgia Ji Yanchi pointed to the potential for Georgia’s rail network to play an important role in the emergence of a ‘New Silk Road’, and the completion of the tunnel was a reflection of the depth of the partnership between the two countries.