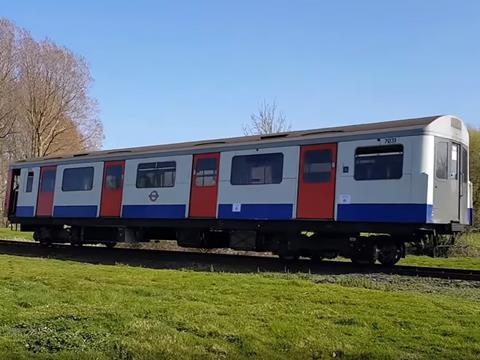 UK: Vivarail has begun testing a former London Underground D78 car which it has converted into a demonstrator vehicle for the use of onboard batteries. Testing of the vehicle’s range and performance are being undertaken at the Quinton Rail Technology Centre, to help inform plans for the future development of passenger-carrying battery and hybrid multiple-units.

Vivarail envisages that battery-powered trains could be used with automatic charging points installed at each end of a line on routes where continuous electrification would be undesirable or expensive. The company said ‘simplicity of operation’ was a key factor in the design, with the driver bringing the train to a stand at a stop board, where a pick-up shoe would automatically engage for charging to begin.

Vivarail has previously converted former D78 metro cars into a Class 230 D-Train diesel multiple-unit, although plans for passenger-carrying trials in service with London Midland were put on hold after a fire occurred during a non-passenger test run in December.