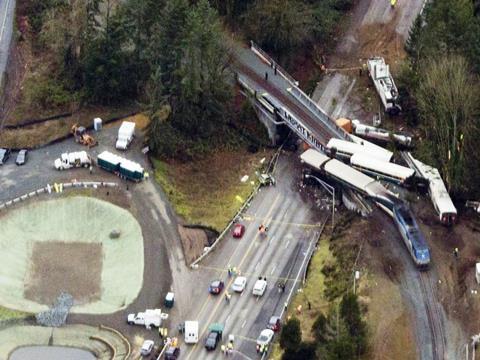 USA: Failure to provide effective mitigation or warning for a hazardous curve and inadequate driver training led to the fatal derailment of an Amtrak passenger train in Washington state on December 18 2017, the National Transportation Safety Board announced on May 21.

The inaugural run of Amtrak Cascades train 501 over the newly-commissioned Point Defiance Bypass near Tacoma derailed when entering a 50 km/h curve at approximately 125 km/h. The leading locomotive and four Talgo coaches fell onto the Interstate 5 highway, killing three passengers. Another 57 passengers and train crew were injured, along with eight road users.

According to NTSB, project promoter Central Puget Sound Regional Transit Authority had failed to adequately address the hazard associated with the sharp curve when reactivating the Point Defiance line for use by commuter rail and Amtrak services. Positive Train Control was not in use when the line was opened for traffic.

Although the driver was ‘somewhat familiar with the route from observational rides and three training runs’, it was the first time that he had operated over the route in revenue service. NTSB determined that he had also had insufficient training on the new Siemens Charger diesel locomotive.

The driver told investigators that he did not see the speed reduction sign ahead of the curve. Recordings from inward-facing cameras in the cab enabled NTSB to review the actions of the driver and conductor during the trip. This showed that the driver had been looking ahead when the train passed the sign and there was no evidence that he had been distracted. The recordings also showed that he took no action to reduce the speed of the train prior to the derailment.

The safety agency also raised concerns that the Talgo VI trainset involved did not meet current US crashworthiness standards ‘and was structurally vulnerable to high-energy derailments or collisions’. It had only been permitted to operate ‘through a grandfathering agreement with the Federal Railroad Administration’.

Noting that responsibility for the planning, safety and oversight of the Cascades service ‘involved numerous organisations, including Amtrak, Washington State Department of Transportation, the Federal Railroad Administration and the Central Puget Sound Regional Transit Authority, NTSB found that ‘there was a general sense that none of the participants fully understood the scope of their roles and responsibilities as they pertained to the safe operation of the service’. This had allowed critical safety areas to go unaddressed.

In its preliminary report, NTSB has issued 26 recommendations to various bodies including FRA, WSDoT and Sound Transit. These include a call for FRA to prohibit the operation of passenger trains on new or refurbished lines unless PTC has been implemented. WSDoT is recommended to discontinue the use of the Talgo Series VI trainsets as soon as possible and replace them with rolling stock that meets ‘all current US safety requirements’. Reiterating three earlier recommendations to FRA, NTSB has called for research into the use of seat belts on trains and the development of standards for coaches ‘that will mitigate passenger injuries likely to occur during derailments and overturns’.

Pointing out that ‘this is the third fatal overspeed passenger train derailment the NTSB has investigated since 2013’, Chairman Robert Sumwalt said all of them could have been prevented by the use of PTC. ‘The deadline for full implementation of PTC is rapidly approaching, and the NTSB continues to advocate for the expedited implementation of this life-saving technology’, he emphasised.