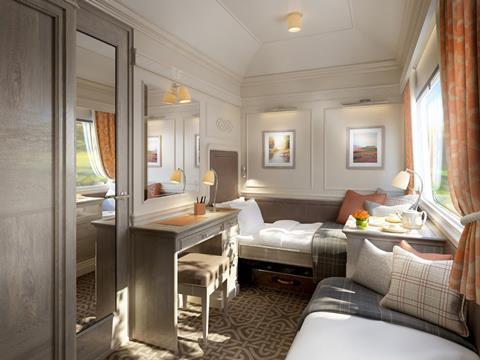 IRELAND: Luxury hotel, river cruise and train operator Belmond has announced plans to launch a land cruise train in Ireland in summer 2016. The company said Belmond Grand Hibernian would be ‘the first luxury overnight rail experience of its kind in Ireland’, with two, four and six-night trips visiting destinations including Belfast and Cork, and daily excursions including historic estates or a round of golf.

Belmond has acquired 10 MkIII coaches from national railway Iarnród Éireann, which will also provide traction and depot facilities in Dublin.

Tenders have been called for the refurbishment of the vehicles, which are to form a luxury sleeper train accommodating up to 40 guests in 20 ‘elegant, en-suite cabins’, with four interconnecting suites for families, two restaurant cars and an observation bar car.

Interior design is being undertaken by James Park Associates, which has worked on other Belmond rail projects including the Northern Belle in the UK and Eastern & Oriental Express in southeast Asia. Belmond says the Irish train will ‘draw inspiration from Dublin’s classic Georgian architecture and blend it with elements of Ireland’s ancient folklore and traditions, evoking the country’s celebrated cultural heritage with a contemporary twist’. The interiors will feature references to ancient mythology, Celtic patterns and metalwork, with Belmond ‘working with Irish craftsman and artisans as much as possible to ensure the authenticity of the designs’.