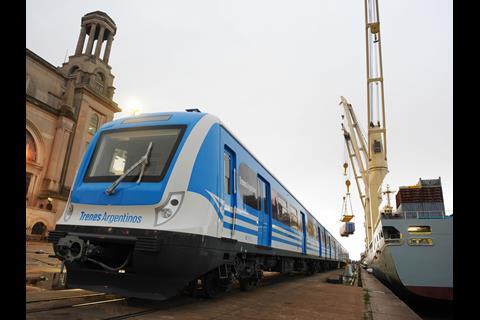 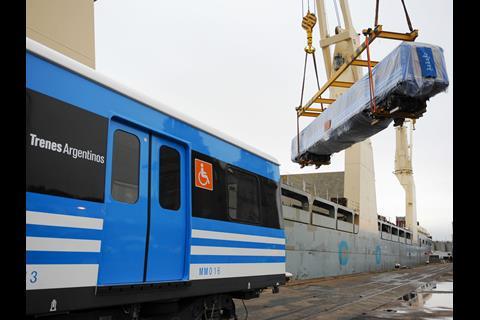 ARGENTINA: The first 12 of an initial batch of 30 electric multiple-unit cars delivered by CSR of China for the Mitre commuter route were unloaded in Buenos Aires on September 6. CSR is supplying a total of 30 six-car EMUs to operate Mitre routes electrified at 830 V DC third rail.

Driver training is already underway using the similar fleet of 25 nine-car EMUs supplied by CSR Sifang and now in service on the Sarmiento route.

With deliveries of the new Mitre fleet due for completion by the end of 2014, EMU cars replaced by the CSR vehicles on the Sarmiento have been redeployed on the Mitre routes to Tigre and José León Suárez.

‘This process of renewal is being accompanied by major infrastructure investment’, said Minister of the Interior & Transport Florencio Randazzo, who reported that first seven of 30 station refurbishment projects were underway on the Mitre network.

With work already completed on the routes to Tigre and Bartolomé Mitre, track renewals were nearing completion on the 37 km between the Retiro terminus in Buenos Aires and José León Suárez.