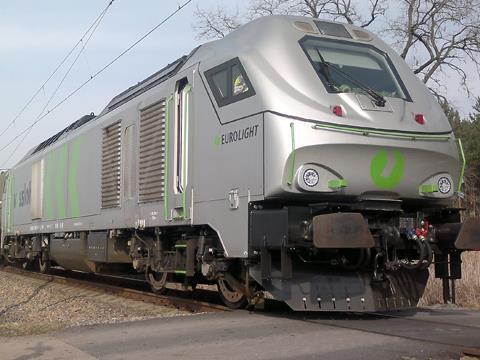 DRS said the locomotives are scheduled to be delivered in late 2013. The design has been developed in conjunction with Beacon Rail Leasing, and is based on a smaller-profile version of the four-axle EuroLight low-axleload freight and passenger locomotive prototype which Vossloh unveiled at InnoTrans 2010 and which is currently operating in Germany.

The locomotives ordered by DRS will be fitted with a 3 750 hp Caterpillar C175 engine and AC traction equipment from ABB, giving a top speed of 160 km/h and 'genuine mixed traffic haulage capabilities' for use on intermodal and passenger trains. The operator said the locomotives will meet 'the latest emission standards' and 'set new standards' for the driver's environment.

'The trading conditions out there are tough, and it is important that we are at the forefront of technology', DRS Commercial & Business Development Director Chris Connolly told the BBC.