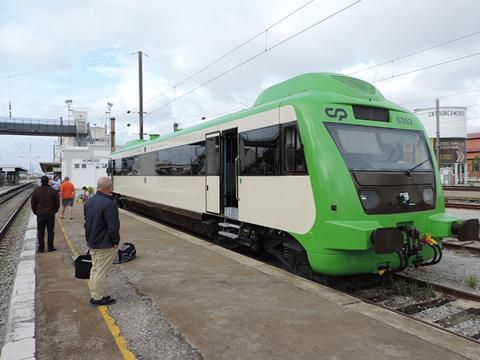 PORTUGAL: National operator CP reinstated a daily return passenger service on the 141 km Eastern Line between Entroncamento and the Spanish city of Badajoz on August 29, using Allan diesel railcars built in the 1950s and refurbished by EMEF Contumil in the early 2000s.

Passenger services on the route had been withdrawn in January 2012 following the publication in 2011 of the then-government’s Sustainable Mobility: Horizon 2011-2015 transport plan which recommended replacement by buses. While the line remained open for freight, this left the Portalegre district without any regional passenger rail services until September 2015, when a Entroncamento – Portalegre service began operating on Fridays and Sundays under an agreement between CP, infrastructure manager Infraestruturas de Portugal, the municipalities of Alter do Chão, Ponte de Sor and Portalegre and the Alentejo Regional Co-ordination & Development Commission.

The service to Badajoz has now been reintroduced after parliament backed a proposal from one of the parties that supports the current government and seeks to reverse rail closures.

On March 31 Infraestruturas de Portugal called tenders for an €18·5m upgrade of the 11 km between Elvas and the Spanish border as part of the first phase of the proposed South International Corridor, which would provide a direct connection between the port of Sines and the Spanish network at Caia.