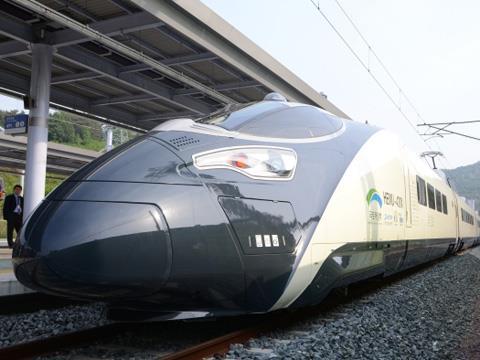 SOUTH KOREA: An experimental high speed train designed for speeds up to 430 km/h was unveiled on May 17.

The HEMU-430X (High Speed Electric Multiple-Unit 430 km/h eXperimental) has been developed with the aim of putting South Korea's major cities within 1½ h of each other, and to attract export orders for Korean technology.

The Ministry of Land, Transport & Maritime Affairs has supported Korea Railroad Research Institute and Hyundai Rotem during the 93·1bn won five-year project to develop the trainset, which uses technology from around 50 Korean organisations.

The latest aerodynamic analysis has been used to produce a front end with 10% less resistance at 300 km/h than previous Korean high speed trains, with an appearance which is intended to be distinctively Korean.

Distributed traction allows the train to provide 16% more seats than KTX-Sancheon trainsets, and high acceleration enables it to reach 300 km/h in 233 sec.

The use of high-strength aluminium extrusions offers a 5% weight reduction compared to KTX-Sancheon, and the body has improved sound insulation. The passenger environment is designed to be 'contemporary, comfortable and spacious'.

The experimental trainset will be based at Busan for trial running which is expected to total 100 000 km at speeds up to 430 km/h by 2015.