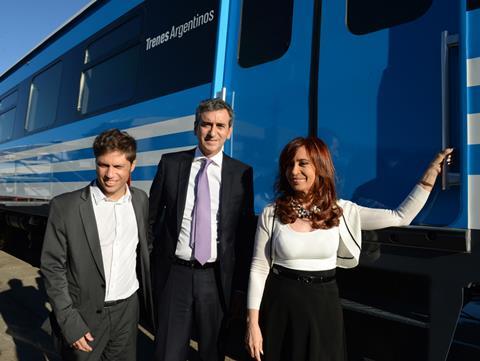 ARGENTINA: On March 5 President Cristina Fernández joined Minister of the Interior & Transport Florencio Randazzo and Minister of Economy & Public Finance Axel Kicillof to present the first four-car EMU to be delivered by CSR Qingdao Sifang of China for the Roca commuter network in Buenos Aires. Following 90 days of trials with the first trainset, the new CSR fleet is due to enter service in August.

Each 25 m long car can accommodate 220 passengers. The new fleet is to comprise three-car and four-car EMUs, capable of operating in pairs. The maximum speed of each air-conditioned trainset is 120 km/h.

Electrification of the Roca route between Buenos Aires and La Plata is due to be completed at the end of this year, said Fernández. As well as cutting the fastest journey time from 1 h 20 min to 55 min, this would enable the peak service frequency to be increased from a train every 25 min to every 12 min.