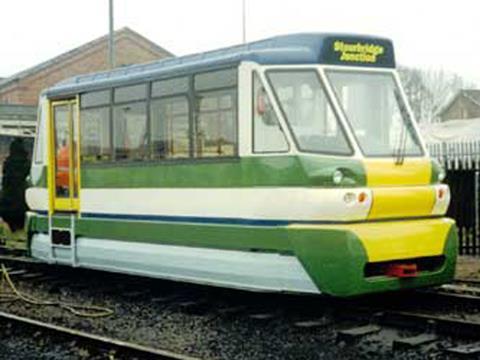 UK: A lightweight diesel railcar with flywheel energy storage is to operate a demonstration commuter service on the Mid-Hants heritage railway in southern England for four weeks during February.

The Parry People Mover PPM50 will provide a peak commuter service from Medstead & Four Marks to Alton, where there is an interchange with South West Trains services to London. There will be five services in each of the morning and afternoon peaks, Monday to Friday.

The PPM50 has space for 20 seated and 30 standing passengers. It uses a flywheel to store energy, permitting the use of a smaller diesel engine than would otherwise be required. 'These lightweight railcars are capable of serving locations that would normally be considered too small for a rail service', said GO! Co-operative Business Development Director Chris Phillimore: 'Based on the success of the demonstration, we will be aiming to move to a permanent service during 2011.'

Two PPM railcars are in daily service with London Midland on the short Stourbridge Town branch in the West Midlands.