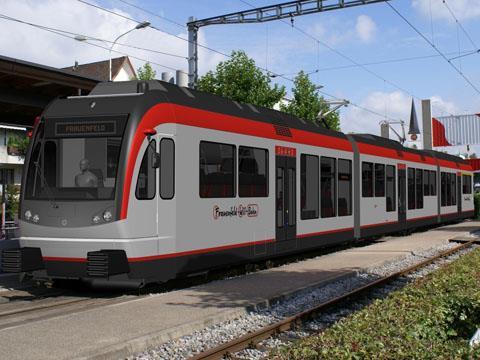 SWITZERLAND: Frauenfeld-Wil-Bahn has awarded Stadler Rail a SFr31m contract to supply five electric multiple-units for its 18 km metre-gauge line in Thurgau, the manufacturer announced on June 30.

Scheduled to enter service in mid-2013, the three-car trainsets will be custom designed for FW, which is electrified at 1·2 kV DC and requires enhanced crashworthiness, electromagnetic rail brakes and the ability to cope with sharp curves.

The units will have low-floor areas for easy access, a large multi-purpose area, first class seating, air-conditioning and passenger information systems. 'With the new vehicles, FW will be very well positioned for the future and for further growth in commuter traffic' said FW Managing Director Dr Hansjürg Düsel.

The contract takes Stadler back to its roots as a specialist rolling stock manufacturer, commented CEO and majority shareholder Peter Spuhler, as its first order after he took over the company 20 years ago was from FW. Custom vehicles now account for around 20% of Stadler's business.