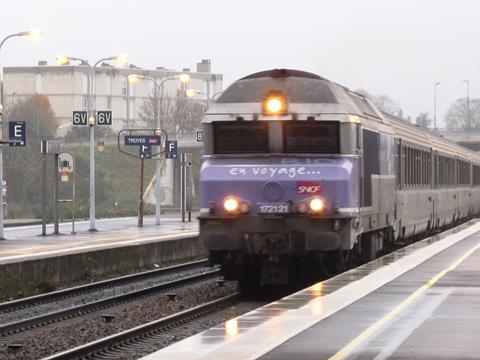 FRANCE: Meeting in plenary session on November 18, the Grand Est regional council approved an agreement that will see it become responsible for three routes within the loss-making Trains d’Equilibre du Territoire network of conventional passenger services operated by SNCF.

Grand Est, formerly the Alsace, Champagne-Ardenne and Lorraine regions, is to succeed central government as the organising transport authority for TET services on the Hirson — Metz, Reims — Dijon and Paris — Troyes — Belfort routes.

The cross-country Hirson — Metz and Reims — Dijon routes are to transfer to Grand Est with effect from January 1 2017, with services on the Reims — Dijon route to be recast in consultation with the Bourgogne-Franche-Comté region which they also serve. Grand Est says that break-even will be achieved through the adoption of a regular-interval service pattern for the TER network of local services within the region.

Due to transfer to Grand Est by January 1 2018 at the latest, the Paris — Belfort route is currently making an operating loss of €30m a year. As part of the transfer deal, central government has agreed to provide €13m a year, and to deploy on the route from 2017 19 electro-diesel Coradia Liner trainsets ordered from Alstom at a cost of €275m.

Further contributions to operating costs are to be made by Bourgogne-Franche-Comté and the Ile-de-France region, via transport authority STIF, which are both also served by the Paris — Belfort route. Grand Est says that it will be working with these two regions to develop an ‘attractive’ service proposition with the aim of revitalising services for the benefit of all passengers.

Welcoming the agreement, Transport Secretary Alain Vidalies said he was convinced that the TET network could be given a new future by central government and the regions working together ‘to improve the attractiveness of these services and more closely meet the needs of passengers’. Discussions were continuing with other regions with a view to concluding similar agreements over the coming days, he added.