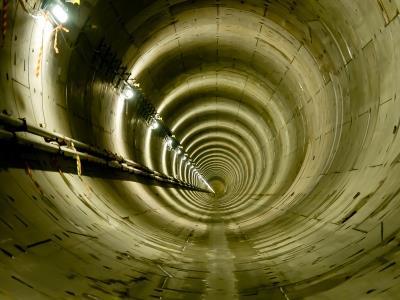 SWEDEN: Infrastructure manager Trafikverket celebrated the successful holing through of the second bore of the Hallandsås tunnel on September 4. The project to remove one of the biggest bottlenecks on the West Coast main line is now expected to be completed in 2015.

Bypassing a steep, winding section of single track in the middle of the corridor, which is now 85% double-track, the 8·7 km twin-bore tunnel will link Båstad in north and Förslöv to the south. The diversion will increase line capacity from four to 24 trains/h, and raise the line speed from 80 km/h to 200 km/h.

Started as part of a capacity enhancement programme in the early 1990s, the Hallandsås project was delayed by difficult geological conditions, fragmented rock and high-pressure water leakage, with the initial ground treatment measures resulting in pollution of local watercourses. As a result, work was stopped in 1997 with little more than a third of the tunnelling completed.

Construction resumed in 2005, with contractors Skanska and Vinci using the tunnel boring machine Åsa to excavate and line the rest of the bores with around 40 000 concrete segments. The project team adopted new pre-treatment methods, using a frozen saline solution to stabilise the rock in front of the TBM and halt the water ingress.

‘Today we have taken the final step towards eliminating the Västkustbanan’s single most troublesome bottleneck', said Trafikverket Project Manager Per Rydberg. ‘We have shown that it is possible to build a stable tunnel through the complicated Hallandsås ground conditions whilst simultaneously meeting high environmental standards.’