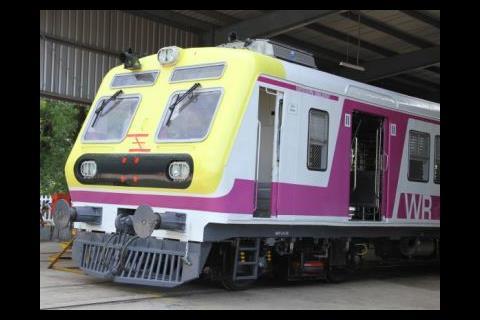 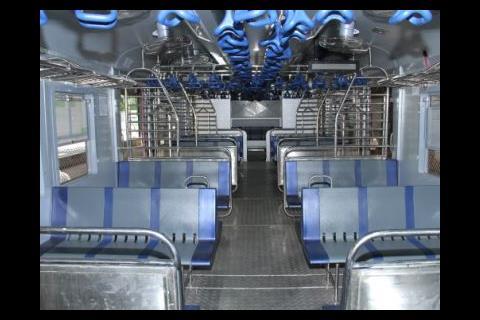 INDIA: The first of 72 new 12-car electric multiple-units being procured by Mumbai Railway Vikas Corp for Central and Western Railway suburban services has been officially unveiled at the Integral Coach Factory in Chennai.

Following the launch on October 1, the prototype unit is expected to undergo test running in Mumbai, before series production begins at ICF in May 2014. MRVC anticipates that production of all 72 sets will be completed by December 2015.

The EMUs are being acquired under Phase IIA of the Mumbai Urban Transport Programme, which is being funded by the World Bank. They will follow on from 101 nine-car EMUs supplied under Phase I, which increased the fleet capacity by 36% according to MRVC. The additional 72 sets will provide further relief for the Mumbai suburban networks, which are currently carrying 7·6 million passengers per day in ‘super-dense crush load conditions’ at peak times.

Whereas the Phase I units were equipped with Siemens electrical equipment, the three-phase traction package for the Phase IIA sets has been supplied by Bombardier under a contract awarded by MRVC in October 2011. This includes IGBT drives, asynchronous motors and regenerative braking, which is expected to cut energy consumption by around 35% compared to the city’s oldest DC-motored units. The microprocessor-based control system has built-in fault diagnostics to facilitate troubleshooting and maintenance, allowing data to be downloaded via a mobile communications gateway.

The vehicles have stainless steel bodyshells, with straight sidewalls and fluted roof panels, along with aluminium composite interior panelling. A roof-mounted forced ventilation system is provided, along with an on-board passenger information system and polycarbonate seating carried on a stainless steel frame. The exterior livery and signage have been developed for MRVC by the National Institute of Design in Ahmedabad.