Lachine maintenance centre to go ahead in Montréal 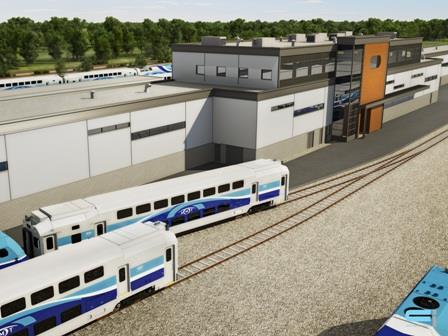 CANADA: Financing of up to C$119m has been approved for a new commuter rail rolling stock maintenance centre to be built by Agence Métropolitaine de Transport at Lachine, near Lucien-L’Allier station in Montréal (MR 9.10 p22).

Calls for proposals will be issued later this year. Construction is due to start in 2012 and take 18 months, with commissioning in 2013. The depot will have stabling for 11 trainsets, an inspection workshop capable of handling a complete trainset, maintenance facilities for three locomotives and three double-deck coaches and an automated train washer.

The Lachine depot will be used to stable and maintain trains operated by AMT on Canadian Pacific routes. A second depot is planned in Pointe-Saint-Charles to maintain the rolling stock running on Canadian National tracks.

Until recently CN and CP have provided maintenance and stabling for the AMT fleet at their own facilities but, as AMT’s rolling stock fleet is being expanded to cope with growing ridership, the transport agency decided to take these activities in-house. AMT ordered 160 double-deck commuter coaches and 20 locomotives from Bombardier in December 2007 and expects to have 305 vehicles by 2015.

The Canadian government will provide around C$25m from the P3 Canada programme, while the Quebec provincial government will contribute C$62m. The remaining C$32m will be funded by AMT.

‘The financial support will enable the AMT to extend the useful life of its rolling stock, to streamline operating expenses and to optimise the service it offers,’ said Quebec Transport Minister Sam Hamad.

* A C$22m, 18-month study for the ‘Train de L’Ouest’ project to upgrade commuter services on the Vaudreuil-Hudson line was announced on February 14. Completion is envisaged by 2016.