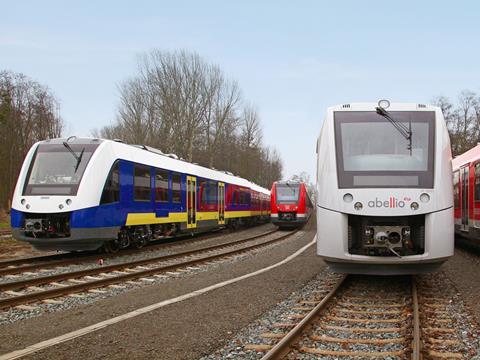 GERMANY: Netinera Deutschland’s Länderbahn subsidiary has formally awarded Alstom a contract to supply 12 Coradia Lint 41 diesel multiple-units by June 2016, for use on Regentalbahn’s Oberpfalzbahn services in Bayern and the Czech Republic.

The order announced on June 16 replaces a contract awarded in December 2011 but subsequently cancelled for Pesa Bydgoszcz to supply 12 Link DMUs, its first order from Germany. The Link DMUs were scheduled to have been delivered between June and December 2014, but ran into problems obtaining type approval and meeting weight specifications; four are now in service with Koleje Wielkopolskie in Poland.

Netinera has ordered the Coradia Lints as a low-risk replacement, having already taken delivery of 63 under a contract signed at InnoTrans 2012. The 140 km/h two-car units will have 125 seats and space for up to 135 standing passengers, with air-conditioning, passenger information systems and CCTV.

‘Alstom thanks Länderbahn and Netinera Deutschland for their renewed trust’, said Didier Pfleger, Vice-President of Alstom Transport for Germany & Austria. ‘The company is confident in the success of this project which has an ambitious schedule in view to manufacture, test and commission the trains in just over one year.’