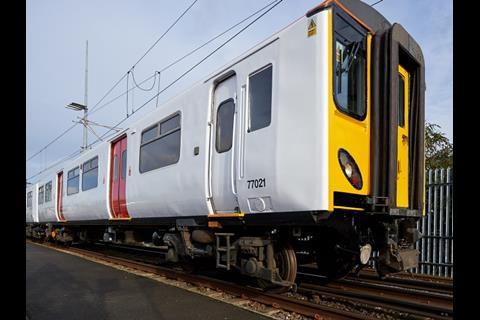 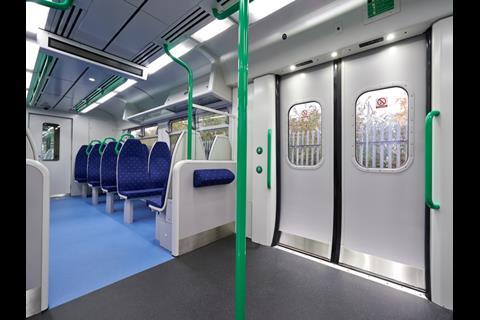 UK: On November 28 leasing company Angel Trains unveiled a re-engineered four-car Class 317 EMU at Bombardier Transportation’s Ilford facility in east London. The concepts demonstrated on the pre-series train, including modernised traction equipment and new interiors, would offer operators the performance, maintenance and passenger ambience benefits of new rolling stock at 50% of the cost, according to Angel Trains CEO Malcolm Brown.

Undertaken mainly at Ilford, with support and testing facilities provided by Bombardier’s UK base in Derby, work costing a total of £7m has included replacing the unit’s four DC traction motors with Bombardier type MJA 280-8 asynchronous AC motors. New AC converters and filters have been installed, and the existing transformer retained.

The unit has been equipped with regenerative braking, and a new brake control unit fitted to each vehicle to blend regenerative and friction braking. Modelling suggests that the modified unit should consume 40% less power, while cutting the time required to accelerate from 0 to 160 km/h from 223 to 177 sec.

Two of the unit’s four cars have received a new ‘metro’ layout, allowing refurbished and unrefurbished interiors to be compared on the same train. New seating has been installed in a 2+2 configuration, while more space has been created in the vestibule areas by repositioning draught screens and door control panels, and removing luggage stacks.

‘Securing customer feedback on this pilot unit is a key objective for us’, said Kate Majoribanks, Engineering Director at Abellio Greater Anglia which is expecting to operate the pre-series unit during the first quarter of 2014 on West Anglia services between London Liverpool Street and Cambridge. ‘The refurbished Class 317 should offer a step-change in both reliability and customer environment’, she said.