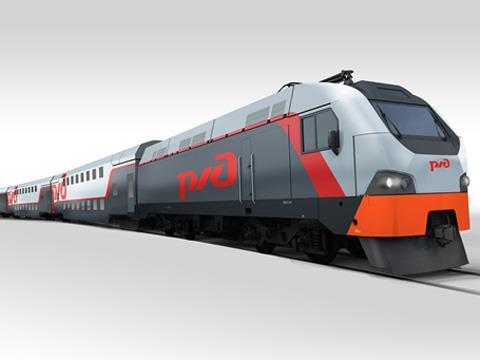 RUSSIA: Transmashholding announced on August 11 that it had agreed terms of reference with Russian Railways for the development of 160 km/h double-deck trainsets for inter-regional services on routes of up to 700 km.

Production is expected to begin in 2014, with the first trains used on routes from Moscow to Tver, Yaroslavl, Vladimir, Ryazan, Tula and Kaluga.

Each train will comprise between six and 12 double-deck coaches from TMH's Tver works, top-and-tailed by single-cab 3 kV DC electric locomotives rated at 4 MW which will be built at TMH's Novocherkassk plant. According to TMH, the height of double-deck stock means there would be no roof or under-floor space for the electrical equipment needed for an electric multiple-unit.

The air-conditioned coaches will have three classes, business class featuring seat-back entertainment systems, standard class having a 2+2 seating arrangement and economy class 3+2. There will also be wheelchair facilities, a snackbar, space for bulky luggage and CCTV.

TMH expects shareholder Alstom to be a strategic partner in the project.