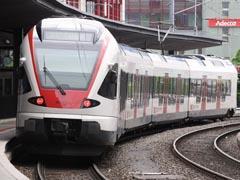 SWITZERLAND: SBB has exercised an option with Stadler Bussnang for a further 13 Flirt electric multiple-units to be delivered in 2012-13. The SFr128m order announced on May 9 is being partly funded by the cantons of Bern, Luzern and Solothurn.

Seven of the 15 kV AC units will be used on Olten - Biel/Bienne services, four on Olten - Luzern RegioExpress services and one on Luzern - Sursee route S18. The final unit will be a spare.

The four-section low-floor EMUs will offer 173 seats, a wheelchair-accessible toilet, space for bicycles and prams, air-conditioning, onboard passenger information systems and CCTV.