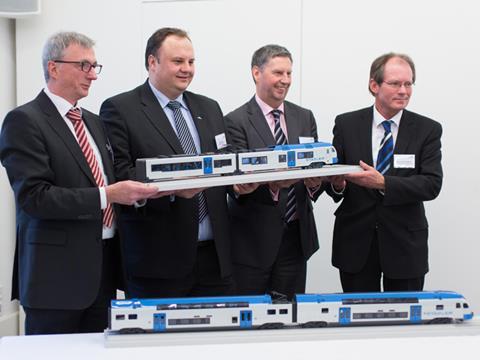 GERMANY: Leasing company Alpha Trains has awarded Stadler Pankow contracts worth €250m for the supply of 28 Flirt and Kiss electric multiple-units for use on services which WestfalenBahn is to operate on behalf of Niedersachsen transport authority LNVG from December 2015.

The 15 four-car Flirt EMUs will be used on Emsland line RE15 Münster - Rheine - Lingen - Leer - Emden. Each unit will have 215 seats, including 15 in first class. There will be space for 34 bicycles, which can be increased to 42 to meet summer demand, and one of the two toilets will be wheelchair accessible. There will be step-free access from all modernised stations, and sliding steps for use at others.

The 13 six-car Kiss EMUs are to be used on Mittelland RE60 Rheine - Osnabrück - Minden - Hannover - Braunschweig and RE70 Bielefeld - Herford - Minden - Hannover - Braunschweig services. These double-deck units will offer 626 seats including 34 in first class, with four toilets including one accessible, and space for 30 bicycles in summer and 18 in winter.

The Flirt and Kiss fleets will have a maximum speed of 160 km/h and feature large information screens, power sockets and CCTV.

'The best way to get ahead of the competition in regional rail services is to use modern, comfortable trains', said LNVG Managing Director Hans-Joachim Menn.

LNVG has previously provided operating contractors with new rolling stock, but this was not feasible for the large order and so partners were needed. 'With the purchase of modern Stadler rail vehicles and the takeover of the entire residual risk by Alpha Trains, WestfalenBahn has the flexibility it needs to react dynamically and yet economically to fast developments in the regional rail market', said Alpha Trains CEO Shaun Mills.