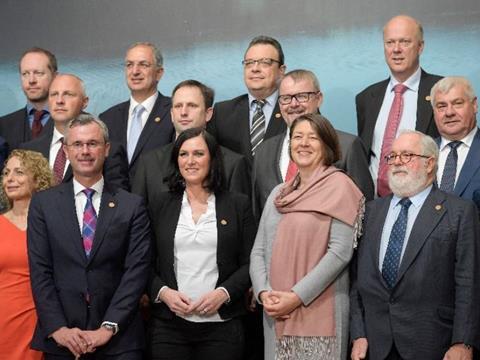 EUROPE: Rail sector associations CER, EIM, ERFA, UIP, UIRR and UNIFE have welcomed a political initiative to encourage the evolution of environmentally-friendly transport, following an informal meeting of Transport and Environment ministers in Graz, organised by the current Austrian Presidency of the EU Council.

During the meeting on October 29-30, the ministers adopted the so-called Graz Declaration, which is intended to signal a new political commitment to promoting a ‘Green Deal for Europe’, in line with the EU’s commitments under the Paris Climate Agreement. While noting that several ‘mobility packages, incentives and regulations’ had been launched to reduce the environmental impact of transport, the declaration emphasises that ‘further ambitious policies are needed for clean mobility and transport’ in order to achieve the previously-agreed objectives.

In the rail sector, the ministers agreed ‘to develop actions’ that would complete the TEN-T core network, increase the ‘efficiency and attractiveness’ of rail by removing barriers to interoperability, and strengthen digitalisation and automation.

In their joint response on November 7, the associations argue that ‘rail has a central role to play in providing environment and climate-friendly transport and helping Europe meet its sustainability challenges’, as ‘the greenest and safest mode of land transport’. Reaffirming their strong support for the EU objectives, the associations said that the European rail sector was ‘committed to delivering a modern rail system that responds to customer needs’. With rail ‘under pressure from fast-paced technological developments and environmental efforts in the other transport modes’, the sector was ‘determined to maintain rail transport at the forefront of the green agenda and to continuously build on our strong safety record’.

Nevertheless, the associations argue that more support is needed ‘at all levels – local, regional, national and European’, in order to maximise rail’s full potential as ‘a backbone of a sustainable mobility in Europe’. In particular, they believe that ‘the success of the EU low-emission policy, getting more goods off road and onto rail, depends on strategic investments in rail and multimodal infrastructure, a level playing field for all modes of transport, the removal of national barriers to the Single European Railway Area and efforts to enhance rail’s performance, by promoting digitalisation and use of standardised data and interfaces to address cost and quality issues.’