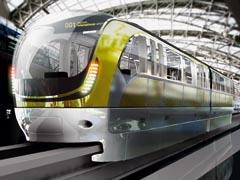 He points out that Hyundai built its own HML-03 maglev prototype which was launched at the Daejeon Expo in 1993 after a five-year development project. This was followed in 1997 by UTM-01, and by UTM-02 which was unveiled at InnoTrans 2004 in Berlin. UTM-02 is now operating on a 1 km line connecting the science museum and Expo science park in Daejeon, and Lee emphasises that it is running reliably in regular service, 'twice an hour each way, 8 h per day'.

Hyundai Rotem is a member of the development consortium for the government-funded Urban Maglev Programme at Incheon airport (RG 5.08 p296), and Lee says the company will be building the next-generation cars for this line, which is expected to open for commercial service in 2012-13. These will be a development of UTM-02, but Lee says 'for commercial service, we need to develop the passenger facilities, lighter weight, and more comfort', adding that 'we are looking at how the Japanese HSST was developed into Linimo'.

Designed for operation at up to 110 km/h, the two-car maglev trainsets for Incheon will take power at 1·5 kV DC. With a tare weight of 20 tonnes per car, the new maglev will have a crush-loaded capacity of 100 passengers per vehicle.