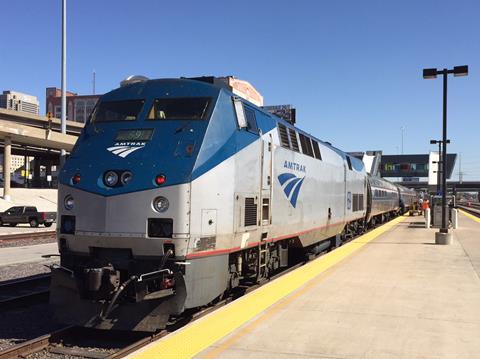 USA: Amtrak should focus on its medium-distance operations and prioritise investment in a network of corridors across the country of between 200 km and 1 000 km, where the greatest ridership can be achieved, believes its new Chief Executive Richard Anderson.

Outlining his vision for the future of the national passenger operator at the 2018 California Passenger Rail Summit in Los Angeles on April 19, the former airline executive pointed to his federal mandate and emphasised the need to comply with the 2019 Congressional budget which – if fully implemented – would halve federal support for Amtrak.

‘We've had a demographic shift in this country’, Anderson said. ‘For example, California is one big dense corridor from the beach to about 200 km inland.’ He cited the extension of Northeast Regional services south of Washington DC into Virginia and North Carolina, where local people ‘find they cannot drive to Washington DC because of the congestion.’

Other dense corridors that are ripe for continued growth through partnerships with state governments include the Dallas – Houston – San Antonio triangle in Texas, the Hiawatha service between Milwaukee and Chicago, and routes between Detroit and Chicago, he suggested.

‘These dense mega corridors are just going to get denser’, Anderson emphasised. ‘The best and cheapest way to serve them is to use existing right-of-way that doesn't take a big environmental approval process.’ He anticipated that these corridors could be developed through co-investment with freight railroads. ‘That's the policy we have to advocate. It’s the only logical choice’, he insisted.

Skirting around the current controversy over plans to withdraw dining cars from the Chicago – New York Lake Shore Limited and the Chicago – Washington DC Capitol Limited, Anderson recognised that there was probably still a role for some long distance trains running across multiple states. However, he felt that Amtrak’s current services were not meeting the needs of the market, citing statistics that show only 4% to 6% of passengers ride such trains from end to end.

Anderson told delegates that Amtrak was now debt-free and ‘stockpiling cash’ to fund much-needed investment in its fleet. Replacement of the 45-year old Amfleet loco-hauled coaches and General Electric P42 diesel locomotives is seen as a priority, but he suggested that diesel multiple-units could be acquired to grow ridership on some routes and provide more off-peak trains on others.

‘Our mission from Congress lays out what we are supposed to do’, Anderson reiterated. ‘Raise revenue, run on time, and minimise government subsidies.’