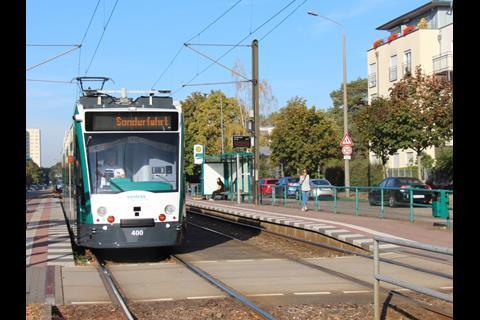 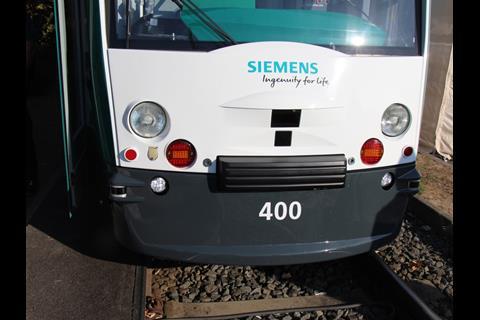 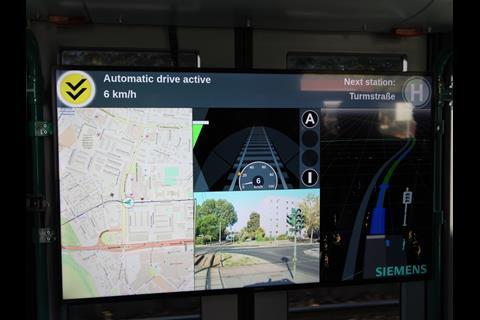 GERMANY: Fully-automated driving of a conventional tram was successfully demonstrated by Potsdam transport operator ViP and Siemens Mobility on September 18 with a special test run for delegates to the InnoTrans trade fair in Berlin. Demonstrations are due to continue until September 21.

Under the joint research and development project, ViP has made available the original Siemens Combino low-floor tram, which has been part of the Potsdam fleet since ending its role as a global demonstrator almost two decades ago. As well as the Siemens Tram Assistant collision warning system fitted to the new Avenio M cars for Ulm, the experimental tram has been equipped with a wide range of sensors including video cameras, radar and LIDAR, to detect surrounding objects and moving traffic.

The onboard computer is provided with a data file describing in detail the route to be followed, including track and street parameters, speed limits, stop locations and other relevant information. High-resolution GPS provides accurate positioning as the vehicle progresses. Complex algorithms assess the data and issue operating commands, including traction and braking based on the detected conditions and a future projection. The scanners monitor the track up to 100 m in advance, giving sufficient margin for a full brake application from the 50 km/h line speed plus a 20% overlap.

Using its artificial intelligence, including ‘learned’ performance from previous runs, the tram responds to lineside signals, and halts at each stop. In the event of a person or vehicle being detected too close to the track, the bell is sounded automatically and if necessary an emergency brake application is triggered.

The autonomous tram is being tested on a 6 km section of route from the ViP depot to Gaustrasse, which is largely segregated track in a street median with signalled and unsignalled road and foot crossings. A driver is still carried in the cab to supervise the operation, and intervene when required. The driver must restart automated driving following an emergency stop, having ascertained that the obstruction has been cleared.

At this stage, Siemens says the tram is purely experimental and not authorised to carry passengers in revenue service. The intention is to identify any technological challenges to autonomous driving under real-life conditions and then develop appropriate solutions. ViP Technical Director Oliver Glaser says the project will bring long-term benefits for users, including enhanced safety and the potential inclusion of driver assistance systems in future procurements.