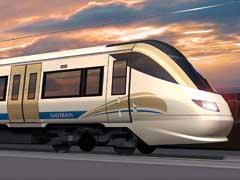 Rail is too often regarded as the mode of last resort for South African commuters today. On the current 1 067 mm gauge network, the rolling stock is ageing and costly to maintain, and journeys can be long and unreliable. The last new commuter trains supplied to the Gauteng region were ?ordered in the late 1980s, and the average age of the fleet is in excess of 30 years.

As a result, the roads are severely congested. The Johannesburg - Tshwane highway is now carrying 157 000 vehicles a day, making it one of the busiest roads in the country. Transport problems are estimated to cost South Africa R300m a year in direct costs, lost production and the effects of accidents.

Gautrain Rapid Rail Link is set to change the public image of rail travel, by demonstrating that modern trains can be safe, reliable, fast and comfortable. The rolling stock for Gautrain is based on the successful Electrostar series from the UK. Taking a ?proven high-performance standard-gauge EMU from the UK and customising it for use in South Africa will set a benchmark for transport in general. Speeds of up to 160 km/h will offer substantial reductions in journey times compared with road, with the planned Tshwane - Johannesburg journey time of 42 min by rail comparing favourably with the typical 2 h by car today.

Current estimates suggest that approximately 20% of Johannesburg commuters will switch from road to rail, with Gautrain expecting to carry more than 100 000 passengers a day.

As part of the Bombela consortium responsible for the build-operate-transfer concession, Bombardier is supplying the core electrical and mechanical systems for Gautrain, including 96 EMU vehicles. These are based on the Electrostar design, of which more than 1 600 vehicles are now in service in the UK. Electrostar has established a good reliability record, achieving a mean distance between failures of up to 80 000 km - the best performance for any modern EMU design in the UK three years running.

Balancing the requirements of airline passengers with the need to accommodate large numbers of commuters has been a key consideration in the design and interior layout of the vehicles. The modularity of the Electrostar family facilitates a variety of configurations, even within the relatively small fleet size.

Of the 24 four-car trainsets, 19 are to be fitted out for commuter services on the Johannesburg - Tshwane route and five will be used on the Sandton - Airport service. The main difference is that two out of the four cars on the Airport sets are designated as airport cars, with 2+2 seating rather than the 2+3 of the commuter configuration. Additional luggage storage areas will be fitted in the saloons of these cars, together with glazed luggage racks.

Each EMU will have 321 seats, and a total capacity of approximately 533 passengers including standees. There is provision for wheelchairs and space for luggage. Each car will have two sets of electrically-operated sliding plug doors per side and two roof mounted heating, ventilation and air-conditioning units.

The trains will have a streamlined front end, designed to present a dramatic and efficient image which will enhance the prestige of the new railway.

The propulsion system will be enhanced in comparison to the UK trains, with 50% more powered axles to cope with high potential passenger loads, a relatively harsh operational environment and 4% gradients. The lightweight aluminium bodies and regenerative braking will help to ensure an energy-efficient train.

Security is also a prime consideration, and the trains will be equipped with Bombardier's Sekurflo networking with two CCTV cameras per car connected to an on-board DVD recorder.

One of the primary objectives of Gautrain is to stimulate economic growth and job creation in the Gauteng region, and a key factor in the choice of the Electrostar concept was its 'design for localisation'. Bombardier's Derby plant in the UK is responsible for manufacturing the trains, but the bolted aluminium construction will enable final assembly to be carried out in South Africa. Bombardier has previous experience in transferring technology and train-building expertise to new markets. This was one factor contributing to its selection for this project.

The first 15 cars, which include all the airport link vehicles, will be completed at Derby. The bodyshells for the remainder will be built in the UK and shipped to South Africa for final assembly by Union Carriage & Wagon. Due to the relatively small order size, Bombardier will supply the bogies, traction equipment and other under floor items from Europe.

Bombardier will also be responsible for vehicle maintenance under a 15-year contract. The reliable vehicles and modular design are expected to bring significantly reduced maintenance requirements compared to existing trains. Bombardier will maintain the EMUs at a 6 850 m2 facility under construction north of Marlboro (p364). As with many of its other maintenance partnerships, Bombardier will provide training and guidance for locally-recruited staff.

It is expected that the long-term success of the Gautrain Rapid Rail Link will easily demonstrate the benefits of expanded and upgraded rail transport facilities in South Africa. As the need for reliable public transport grows increasingly urgent, Bombardier is already delivering on the promise of improved performance.