China to Turkey train to launch this year 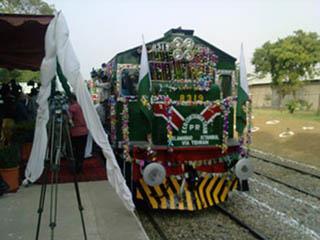 These will build on the Pakistan - Turkey train which ran last August (RG 9.09 p3). The trips are being organised by ECO on a supranational corridor basis to minimise bureaucratic hurdles, with containers despatched under ECO seals to eliminate the need for border inspections.

This July a train will run from the Iranian port of Bandar Abbas to Kazakhstan, with a regular scheduled service planned to follow. Consultants are currently examining the launch of an Istanbul - Almaty train via the Sarakhs border crossing which can now handle 400 wagons a day following a US$75m upgrading.

Agreement has been reached with China for an Urumqi - Istanbul train, and proposals for a standard gauge line across Kazakhstan to China will be announced later this year.

After the successful Islamabad - Istanbul trial last year, a train will set off in the opposite direction on August 2. Agreement has been reached to cut the journey time from 14 to 10 days, comparing favourably with 17 days by road and 37 by sea. ECO is negotiating a 20% cut in tariffs to make the price of rail comparable to sea. 'The ECO train is not there to cover costs elsewhere on the rail networks', stressed Kahagh.

While the various ECO trains cannot avoid a degree of political symbolism, a strictly market-based approach is being taken to their development. Pakistan Railways is to launch a website to handle marketing, and studies are underway to identify potential traffic, expected to include cotton and manufactured goods. 'There is enough cargo for this train', Kahagh assured Railway Gazette International, and trade between Iran, Pakistan and Turkey could triple with better transport.

Infrastructure enhancements are being discussed, with upgrading of the Pakistan Railways line between Iran and Quetta and electrification of Iran's Tehran - Tabriz route proposed. In the longer term a railway around Lake Van in Turkey could replace the current train ferry.