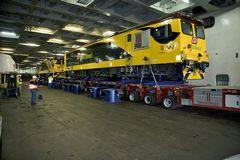 AUSTRALIA: The first two of 45 Class 3800 locomotives being supplied to QR by Siemens will enter service on coal trains in the Goonyella region next month.

The 1067 mm gauge 25 kV AC electric locos are being commissioned at QR's Jilalan depot, having arrived in Brisbane on June 23 after a 43-day voyage from Europe.

The 132 tonne locos are equipped with regenerative braking which will be exploited on the steeply graded coal routes. 'With locomotives making 500 round trips a year, this is a simple and also effective way to save up to 4 500 kW of energy per train annually and, at the same time, to reduce CO2 emissions by 175 000 kg per train annually,' said Paul Bennett, head of Siemens Mobility in Australia.

The AC drive of the existing Class 3700 locos has also been modified. 'This retrofit will increase the service life of these locomotives by twenty years,' said Bennett.