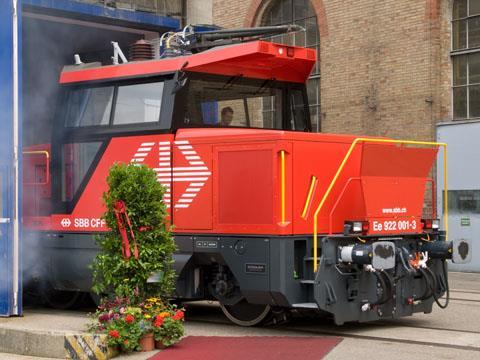 SWITZERLAND: The first of 21 Stadler Ee 922 electric shunting locomotives ordered by Swiss Federal Railways was formally handed over on July 3. The locomotives will be deployed shunting passenger stock at seven major stations by the end of 2010, replacing Ee 3/3 locomotives dating back as far as the 1930s.

SBB placed the SFr40m order for the locomotives with Stadler Winterthur in December 2007. Rated at 750 kW, they are equipped for both 15 kV 16·7 Hz and 25 kV 50 Hz power supplies for use at border stations including Basel. According to the manufacturer they will be able to pull a 700 tonne train up a 0·6% gradient.

The Ee 922 is based on a product family developed by Stadler for shunting and freight services. These are available in two power categories, 750 kW and 1 500 kW, and can also be supplied as electro-diesels.

'We were able to hand over the vehicle to the customer within only 1½ years from the award of the contract', said Jürg Gygax, Chief Executive of Stadler Winterthur. 'We have thereby provided an impressive demonstration of our capability. The Ee 922 is also the first electrical locomotive to leave our factory that has been completely manufactured by Stadler Winterthur.'