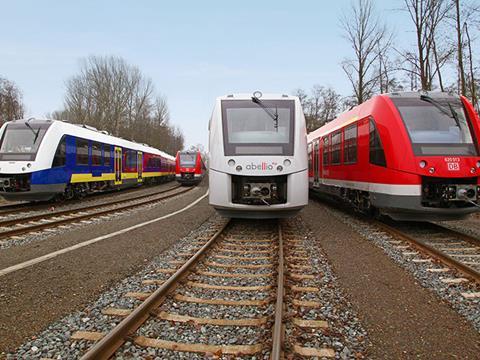 GERMANY: A letter of intent was signed on March 19 between Alstom Transport and the municipality of Calw in the Land of Baden-Württemberg paving the way for emission-free fuel cell trainsets to operate on the so-called Hermann-Hesse line from 2018.

Closed to revenue-earning traffic in 1988, the Calw – Weil der Stadt route is to be reopened for passenger trains in 2018 and will serve as one of the proving grounds for Alstom’s fuel cell multiple-unit technology. This is intended to enhance rail’s environmental credentials by eliminating harmful emissions and significantly reducing noise. Calw lies in the northern part of the Schwarzwald region, and the reopened line is seen as having considerable tourism potential.

Alstom hopes to have 40 fuel cell-powered regional trains in commercial service on regional lines in Germany by 2020 under an accord signed at the InnoTrans trade show in Berlin in September 2014. Under the letters of intent signed between Alstom, the Länder of Niedersachsen, Nordrhein-Westfalen and Baden-Württemberg and the transport authority of Hesse, two prototype modified Coradia trains are to be developed by the end of 2018 for revenue service trials.

The powertrain will use hydrogen fuel cells, batteries and energy storage systems to replace a roof-mounted diesel powerpack, giving equivalent performance to an electric multiple-unit. While the fuel cells will feature ‘proven technology’ already deployed in the automotive sector, Alstom will provide the software, control and energy storage equipment.